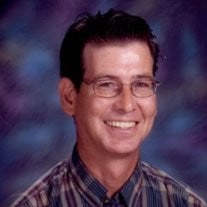 Douglas Kemp Scott, 56, of Tulsa, Ok, peacefully went to the Lord on August 18, 2013. He was born January 8, 1957 in Caney, Kansas to Arthur and Barbara Scott. He received his Bachelors Degree in music from Tulsa University. He spent over 30 years teaching band & orchestra. 28 years of which were at Wilson Middle School in Tulsa. He was a mentor to his students, who meant so much to him. In 2009, he was awarded $100,000 in music instruments via ABC’s The Extreme Makeover-Home Edition, Mr. Holland’s Opus Foundation, and the rock band “KISS”. In 2010, he received the Teacher of the Year Award from Wilson Middle School. After retirement he taught private violin/fiddle lessons at The Guitar House of Tulsa. He enjoyed playing the fiddle for various bands. During the last weeks of his life he was working on Western Swing twin fiddle arrangements for his brother, Kirwin and himself. Doug was an active member of Will Rogers United Methodist Church, the choir, Chairmen of Trustee’s, and was a member of the Praise Band. He served as Choir Director at St. Marks United Methodist and Inola Methodist Churches. Survived by wife, Mary Stone-Scott, mother Barbara Scott of Tulsa, his son Andrew Gordon of Tulsa, his daughter Sarah Elizabeth, husband Daniel, and granddaughter Collins Corlett (the delight of his life) of Talala, Ok.,sister, Karen and husband Kent Notestine, of Wichita, Ks, brother, Kirwin and wife Mary Jane of Inola, Ok., 3 nephews, 2 nieces and his children’s mother Mary Ruth Sexton Scott. Preceded in death by father, Arthur Gordon (Corky) Scott. Visitation will be at Floral Haven Chapel, 6500 S. 129th E. Ave, Broken Arrow, Ok, Thursday, August 22 from 12-6 PM. Services will be held at Will Rogers United Methodist Church 1138 S. Yale Ave, Tulsa, Ok, Friday August 23 at 10 AM. Graveside Service to follow at Floral Haven. In lieu of flowers, donations may be made in the Honor of Douglas K. Scott to Mr. Holland’s Opus Foundation. To donate by check, please send your check or money order to: The Mr. Holland’s Opus Foundation 4370 Tujunga Ave., Ste 330, Studio City, CA 91604. Donations can also be made through www.mhopus.org

Douglas Kemp Scott, 56, of Tulsa, Ok, peacefully went to the Lord on August 18, 2013. He was born January 8, 1957 in Caney, Kansas to Arthur and Barbara Scott. He received his Bachelors Degree in music from Tulsa University. He spent over 30... View Obituary & Service Information

The family of Douglas Kemp Scott created this Life Tributes page to make it easy to share your memories.