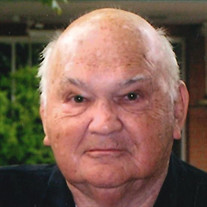 Duane Lee Helling Born April 15, 1934 to parents, Ludwig Herman Helling and JoHanna Gerdes Helling in Douglas County, Omaha, Nebraska. A second generation American, Duane grew up in Omaha, Nebraska with his two sisters; older sister, Dorothy, and younger sister, Donna. Duane’s parents immigrated from Germany and were naturalized US citizens. Duane attended a Lutheran primary school and later attended South High School, in Omaha. Duane courted Kai Bowman for five years. They married on May 28, 1955. Not long after, they moved to Oklahoma and raised their family. Together, Duane and Kai raised three children, Duane Randall, Scott Allen, and Tammy Jo. Duane and Kai resided in Tulsa, Oklahoma. Duane was known for his ability to fix anything. Family members recount never having to pay a repairman. They just called Duane and he was always willing to help. Duane dedicated many years of service to General Electric and retired after 25 years. Duane also served as a reserve deputy for the Tulsa County Sheriff’s Office. In 1997, he received an award for Reserve Officer of the year, and in 2011, he received the Distinguished Service Award for 50 years of service. Duane was always committed to the work he was called to do. Duane deserves recognition for his service to community. Throughout much of his adult life, Duane donated blood and undoubtedly saved countless lives with his donations. Aside from the accolades and accomplishments from his work endeavors, perhaps his greatest accomplishment was his devotion to his marriage. Duane and Kai celebrated 65 years together in May of 2020. Duane and Kai literally spent a lifetime together. Duane was a devoted husband and a loving father. He loved getting involved with the sports and activities his children participated in. Duane found enjoyment through his many hobbies such as hunting, golfing and woodworking. Duane became skilled at woodcarving and loved carving gifts for his grandchildren and great-grandchildren. He was also known for his rather peculiar ability to befriend a backyard squirrel. Duane would even feed the squirrel out of his hand. The neighborhood kids that walked home from school would stop and marvel at Duane’s squirrel whispering talents. He was Grandpa Helling to six grandchildren and 11 great-grandchildren, with two more on the way this year. His grandkids and great-grandkids will remember him as a gentle and caring Grandpa. Duane missed the love of his life, Kai, after her passing on October 19, 2020. He told her to wait for him at the pearly gates. He was ready. Duane passed from this earth on Tuesday, January 19, 2021. He was preceded in death by his parents, Ludwig and JoHanna Helling, his sister, Dorothy, and his precious wife, Kai LaRue Helling. Those left to cherish Duane’s memory and carry on his legacy are his children, Duane Randall Helling (Barbara), of Inola, OK; Scott Helling (Christine), of Pembroke Pines, Florida; Tammy Helling (Bill Richardson), of Tulsa, OK. He will be forever missed by his six grandchildren and 11 great-grandchildren, Chris Helling (Lindsey), Sophie, Mercy and Noah Helling of Jones, OK; TJ Helling (Polly), Anna Jo, Caleb, Isabelle, and Titus Helling of Inola, OK; Jerod Helling (Emily), Evelyn Helling of Ponca City, OK; Greg Helling (Jenna), Nora and Jack Helling of Edmond, OK; Stephanie Ellis (Paul), Charlotte Ellis of Tigard, Oregon; Rebecca Gudz (Cullen), of Panama City, Florida. Duane is survived by his sister, Donna Fritz of Fort Wayne, Indiana. He will be missed by a host of relatives, friends, nieces and nephews, and great-nieces and nephews. Duane will be lovingly remembered as kind, likable, caring, gracious, hard-working, and a true family man.

The family of Duane Lee Helling created this Life Tributes page to make it easy to share your memories.

Send flowers to the Helling family.