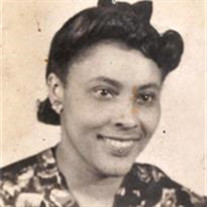 Aunt Nellie Nellie Durand, daughter of Thelemaque and Marie Julie Kernistant-David was born in Leogane Haiti on February 14, 1913. Nellie was preceded into death by her husband Henri Durand, and brothers, Emile, Franck, Antoine and Lamartine. Those close to her affectionately called her, Tante Nell. At the age of 19, Nellie left the tiny village of Leogane Haiti, bound for the United States, to join her mother and brother Antoine in Brooklyn New York. As a young woman, Nellie worked as a seamstress in Manhattans garment district. At the age of 26, Nellie married Henri Durand. Although she had no biological children of her own, Nellie was mother to many, especially to Bernadette Bouciquot, her niece, whom she brought from Haiti and raised from the tender young age of eight years old. Nellie was a devout Catholic who loved Jesus and was strong in her faith. She loved to travel and enjoyed the company of those she encountered. Nellie retired in Ft. Lauderdale, Florida where she was constantly surrounded by family and friends who loved her dearly. She later relocated to Tulsa, Oklahoma to be cared for by her niece, Bernadette Bouciquot. Nellie will always be remembered and missed by many. The family would like to give sincere thanks to Infinity Care of Tulsa staff and chaplains for their loyalty, commitment and faithful service for the last five years of care to Nellie.Survived By: Nellie is survived by her nieces, Bernadette Bouciquot, Manon Johnson and her husband Bernard, Monique David, Julie David-Malloy and her husband Darwin. Her nephews, Frantz David and his wife Martha, Roland David and his wife Myriam, Serge David, Patrick David, Anthony David, Herve David and his wife Leslie and Serge Raveau. Her grandchildren, Natalie M. Lewis, Aisha L. Van Doren, Brianna A. Van Doren and Davon L. Van Doren. Her great grandchildren, Zyanni A. Van Doren, Trinity A. Lewis, Chloe. L. Lewis, Jasmine L. Lewis and Jaxsen A. Van Doren. Her cousins, Simone Kernisant, Dr. Roger Kernisant, Flor Coles, and Bernadette Bobo. In addition, her longtime friends, Toune and Dalie. Her other close friends from Ft. Lauderdale Florida, Thelma Grinnage, Edith Josue, Vanessa and Yolaine Fanfan, Duval Joseph and Sheila Paul.

The family of Durand Nellie created this Life Tributes page to make it easy to share your memories.