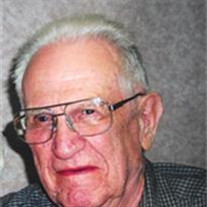 E. Edwin (Ed) Schaefer Â  E. Edwin (Ed) Schaefer, 85, of Broken Arrow, OK died Wednesday morning, August 1, 2012 at Clarehouse. He was born December 17, 1926 in Uehling, NE to Emil N. and Marie (Henke) Schaefer. Â  Ed graduated from Schuyler NE High School in 1944. He attempted to enter military service but could not, due to the accidental loss of his right eye . Instead he went to work for the FBI during the final year of WWII. He then attended Denver University for two years. Ed then went to work with Haliburton in Casper, WY. Ed married his High School sweetheart, Joyce Wragge in Denver in 1956. From this union three sons were born in Casper, WY where Ed worked for TriGood Oil. Ed was transferred to Tulsa, OK in 1963 where he worked until retirement from Terra Resources as a Joint Venture Accountant Manager in 1985. During his employment he was involved with COPAS (Council of Petroleum Accountants Society), PASO (Petroleum Accountants Society of Oklahoma), and PMTA (Petroleum Motor Transport Association). He was a past president of both PASO and PMTA. He traveled for the oil company as an expert witness for accounting and contract disputes. Ed had multiple hobbies to include travel throughout the US with his wife, especially to historical sites; woodworking, hunting, and especially fishing. Ed specialized in making pen sets from native and exotic woods. He was a past member of Knights of Columbus, Eucharistic Minister and choir member of St. Anneâ??s Catholic Church of Broken Arrow, OK. Ed Schaefer is survived by Joyce, his wife of 56 years. His son Paul of Memphis, TN, andÂ Paulâ??s daughter Audrey of Tulsa. His son Nick, wife Jennifer, and daughter Megan of Platte City, MO. Brother Donald Schaefer of Hillsboro, OR; sister LaVonne Loseke of Kearney, NE; and sister Donna Lindeman of Columbus, NE; as well as numerous nieces and nephews. Ed was preceded in death by his parents â?? Emil and Marie, and infant son. Ed will be greatly missed by his family and friends. His Rosary will be at St Anneâ??s on Friday, August 10, 2012 at 7:00pm. Memorial Mass will be held at St Anneâ??s Catholic Church located at 301 S 9th Street, Broken Arrow, OK 74012 at 11:00am on Saturday, August 11, 2012. Inurnment will follow at a later date at Floral Haven in Broken Arrow. In lieu of flowers donations can be made in Edâ??s name to the Alzheimerâ??s Association and Clarehouse of Tulsa, OK.

The family of E. Edwin “Ed” Schaefer created this Life Tributes page to make it easy to share your memories.