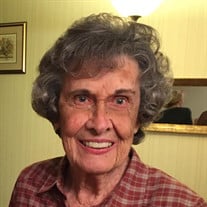 Mrs. Paul B. Sanwick Sr. (Jean) passed away on March 19, 2020 in Tulsa, OK after a short hospital stay that was required after falling and breaking her hip. She was just shy of 97 years old. Jean was born April 17, 1923 in Austin, TX to Larue and Elmer McClain. She graduated from the University of Texas in 1944 with a Bachelor’s of Business Administration degree. It was in Austin that Jean met Paul Sanwick, who was a pilot in the Army Air Corp. He was stationed at Bergstrom Army Airfield and the two were married in 1943. During World War II Paul and Jean lived at air bases in Texas, Oklahoma and Nebraska until Paul was deployed overseas for the duration of the war. After the war and Paul’s separation from the Army Air Corp, Houston, TX became their home. Paul Jr (Scott) was born there in 1949. Claire (1951) and Jim (1953) were born after a move to Dallas, TX. The family then moved to El Paso, TX for seven years and eventually to Denver, CO. One of Jean’s passions was community service. She spent years volunteering as a librarian, as a nurses’ aid and as an officer in the PTA. An avid reader, she would often read two or three books at the same time. Another interest was world travel. She and Paul took numerous international trips. She especially liked Great Britain and after Paul’s retirement would plan their nearly annual trips meticulously. Often she would help others plan their own trips. After Paul died in 2006 at 87 years of age, Jean and Claire moved to Tulsa, OK to be closer to Jim and his wife Gay. Jean continued to dedicate her life to the care of Claire who has MS and lived with her parents until Jean’s passing. Jean was absolutely part of “The Greatest Generation”. She was always supportive of her husband while he was serving in the military. Upon Paul’s return from the war they just got on with life, raising their family and doing what so many others of that generation did. Jean and Paul were married for 63 years. Always caring and willing to help others with little regard for herself, Jean will be missed terribly. She is survived by her son Scott (Gwen) of Steamboat Springs, CO., and daughter Claire and son Jim (Gay) of Tulsa, OK. She is also survived by her grandchildren Amanda Camacho (Michael Stowers) and Travis Sanwick (Liz) as well as great granddaughters Mia and Maci Camacho. She was preceded in death by her husband Paul and her grandson Justin Sanwick. ***FOR THOSE THAT CANNOT ATTEND THE SERVICE IN PERSON, PLEASE COPY AND PASTE THE FOLLOWING WEB ADDRESS IN YOUR BROWSER OR CLICK ON THE LINK: THE LIVE STREAM WILL START AT APPROXIMATELY 10:45 AM. IF YOU DO NOT SEE THE LIVE FEED, PLEASE REFRESH THE PAGE UNTIL IT APPEARS*** http://webcast.funeralvue.com/events/viewer/52209

Mrs. Paul B. Sanwick Sr. (Jean) passed away on March 19, 2020 in Tulsa, OK after a short hospital stay that was required after falling and breaking her hip. She was just shy of 97 years old. Jean was born April 17, 1923 in Austin, TX to Larue... View Obituary & Service Information

The family of E Jean Sanwick created this Life Tributes page to make it easy to share your memories.

Send flowers to the Sanwick family.