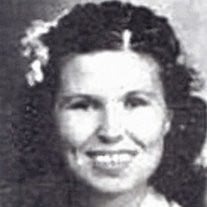 Dora (Doris) Edith (Newberry) Fields, 99, passed away on August 22, 2013 in Broken Arrow. Edith, as she preferred to be called, was born to Jess and Dora Catherine (Dugan) Newberry in Columbus, Kansas on April 15, 1914. Her father, a coal miner, moved the family to Tulsa, Oklahoma, where she attended Central High School. At age 21, she waitressed at the Tulsa State Fair and met charming fiddle player, named Jack Oliver Fields. She married Jack and together they had six children. Their marriage brought them many adventures, including the ownership of a tiny Tulsa restaurant at 1534 E. Admiral Blvd., known as the D&A CafÃ©. It was there that they delighted many hungry Tulsans with their favorite menu item – pork tenderloin. Later, Edith worked for Kress Five and Dime, Newberry Five and Dime, Safeway Groceries, Piccadilly Cafeteria and the Tulsa County Health Department. She and Jack were happily married for over 50 years. Edith was a fiery redhead and a cut-up, who loved laughing and being surrounded by people. Even in her eighties, she was still full of life, and met and married Ollie Pendergrass. Together, they enjoyed going to senior-night dances at the VFW. Edith also loved movies, flea markets, parties, road trips and playing bingo, but mostly enjoyed spending time with her family. She was preceded in death by first husband Jack Oliver Fields; her second husband Ollie Pendergrass, and her sons, Gary, Robert and Jim Fields. She is survived by three daughters: Jacquelyn Juanita Randall of Tulsa; Carol June Farris of Sand Springs, and Debra Sue Purvis of Disney, Oklahoma. She is also survived by many grandchildren and great-grandchildren. A funeral service will be held at Floral Haven Funeral Home on Tuesday, August 27th at 12:30p.m.

Dora (Doris) Edith (Newberry) Fields, 99, passed away on August 22, 2013 in Broken Arrow. Edith, as she preferred to be called, was born to Jess and Dora Catherine (Dugan) Newberry in Columbus, Kansas on April 15, 1914. Her father, a coal miner,... View Obituary & Service Information

The family of Edith D. Fields created this Life Tributes page to make it easy to share your memories.