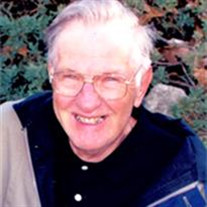 Edward Henry Blakestad went to be with the Lord on May 1, 2010, after battling Parkinson’s Disease for several years. Edward grew up in Mena and Gentry, Arkansas and then his family moved to Tulsa, where he was a member of the first graduating class of Will Rogers High School. Later he served his country honorably in the Navy from 1941 – 1945 in the Pacific where he witnessed the landing at Iwo Jimo and the atomic bomb at Hiroshima. Following the war he attended Oklahoma A&M (OSU) on the GI Bill where he earned a B.S. in Mechanical Engineering. He married the “girl next door”, Donna Christine Burton, who was his wife for sixty one years. Edward and Donna moved to Milwaukee, Wisconsin so that Edward could attend training for Allis Chalmers. Later they returned to Tulsa and he continued a long career with Allis Chalmer, Kennedy Engineering, finally retiring from Automatic Engineering. He raised his family on a farm in Owasso. In addition to a full time career in engineering, Ed also raised horses, Charlais Cattle, gardened and experimented with different varieties of crepe myrtles. Later Ed and Donna sold the farm and retired to Tulsa. In his retirement, Ed enjoyed playing golf and vacationing to visit his grandchildren. In lieu of flowers, the family requests donations be made to the Parkinson’s Disease Foundation, 1359 Broadway, Suite 1509, New York, NY 10018. Funeral services for Ed will be held Thursday, May 6, 2010 at 12:30 PM, at The Floral Haven Funeral Home Chapel in Broken Arrow, Oklahoma. Burial will follow immediately at Floral Haven Memorial Gardens in Broken Arrow. Visitation will occur on Wednesday from 1pm until 9pm.Survived By: Ed is survived by his wife, Donna, of the home; four daughters: Linda Kirk, Dyan Naiman and granddaughters Candice and Marla; Sheila Liles and husband Steve and grandsons Shane and Scott; Nancy Klein and husband Tom and granddaughters Erika and Danielle.

Edward Henry Blakestad went to be with the Lord on May 1, 2010, after battling Parkinson&#8217;s Disease for several years. Edward grew up in Mena and Gentry, Arkansas and then his family moved to Tulsa, where he was a member of the first graduating... View Obituary & Service Information

The family of Edward Henry Blakestad created this Life Tributes page to make it easy to share your memories.