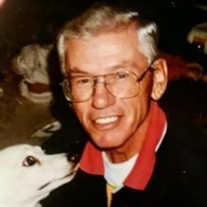 Edward “Tris” Burnett decided it was time to go hang with Jesus on the morning of July 26th, 2021, in Tulsa, Oklahoma, at 91 years young. Born September 22nd, 1929 in Patrick, Arkansas to Nora Pearl (Stapleton) and William Harrison Burnett, Tris was the 6th of 8 children and was named after his father’s hero and baseball Hall of Famer, Tris Speaker. Throughout his life, Tris would share his father’s love and passion for baseball. After growing up in Stilwell, Oklahoma and graduating from Stilwell High School in 1947, Tris attended Connors State College in Warner, Oklahoma on a baseball scholarship. After coming to the realization that he couldn’t hit a curve ball, and finding out his selected Chemistry major was even more difficult, he decided after graduation to enlist in the United States Air Force “to see the world.” The world turned out to consist of some of the most frigid parts of Alaska and Minnesota, which, undoubtedly, was the impetus for him later keeping his house at sauna-like temperatures. His kids believed he did this to save money, yet his golfing buddies believed he did it so he would be better acclimated to the heat while playing golf, therefore providing him an advantage. After deciding that the life of an enlisted man was a bit less exciting than expected, Tris, after fulfilling his military commitment, was honorably discharged with the rank of airman first class in 1954 and enrolled in Northeastern State University in Tahlequah, OK, where he graduated in 1957 with a degree in Sociology, beginning a long career in personnel management. It was shortly thereafter that he decided to pick up golf, where, unlike baseball, “the ball didn’t curve at all, it just sat there,” and thus began the initial preparation for his second (and more fulfilling) career in retirement golf. His “first” career included US State and Government Civil Service jobs in Kalispell, MT, Lawton, OK, Oklahoma City, OK, Gallup, NM, and Tulsa, OK, where he retired from the Corps of Engineers in 1991. On September 4, 1962, while in Kalispell, MT, and after only playing golf for 3 years, Tris won the 25th annual International Labor Day Golf Tournament at Buffalo Hill Golf Club. After retirement, he pursued his second career, playing golf almost daily with his buddies for 30 years. While sure to miss his company, they probably won’t miss his chip-ins or 30 foot snakes that he seemed to run in a couple times a round. Preceded in death by his parents, six sisters, Maxine, Mary Faye, Betty, Ruth, Mildred, and Marjorie, and one brother, Ty. Survived by his children, Mick Burnett (Stacia), Shelley Overack, Roger Burnett (Heather) and Jennifer Wiseman (David), eleven grandchildren, Ryan Overack, Rachel Choate (Trevor), Lauren Overack, Cole Wiseman, Whitney Burnett, Ty Burnett, Raquel Burnett, Gage Burnett, Brooke Burnett, Jenna Burnett, Mick Burnett, two great-grandchildren, Zoey and Zander Choate, the mother of his children, Barbara Burnett, and several nieces and nephews. “Poppy” to his grandkids, “Daddy Rabbit” to his kids and “Trish” to his golfing pals, Tris was a fun grandpa, an old-school, but loving father, and a tenacious competitor. He will be sorely missed by many.

The family of Edward Tris Burnett created this Life Tributes page to make it easy to share your memories.

Edward “Tris” Burnett decided it was time to go hang with Jesus...

Send flowers to the Burnett family.