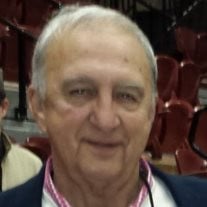 Edward E. “Eddie” Shafer II, 71, of Broken Arrow, died on Saturday, January 11, 2014. He was born in Muskogee, Oklahoma on March 22, 1942, the son of Edward and Geneva Shafer. Eddie married the love of his life, Paula, on August 12, 1977, in Tulsa. He had worked as a salesman in the restaurant supply industry. Eddie was an avid OU fan. He is survived by his wife, Paula, son, Steve Shafer, and his wife, Darci, of Oklahoma City, two daughters, Shellie Shafer, and John Ashley, of Broken Arrow, and Cassidy Shafer, of Norman, Oklahoma, grandchildren, Ellen Jane Shafer, Stephen Edward Shafer, Jr., Ozzy Malachi Ashley, and beloved dogs, Boz and Rock, and numerous other family members and friends. He was preceded in death by his parents. In lieu of flowers, the family asks that memorial donations be made in Eddie’s name to Lab Rescue OK, Inc., 2608 W. Kenosha #434, Broken Arrow, Oklahoma 74012. Payments may be made online at www.labrescue.net.

The family of Edward E. “Eddie” Shafer created this Life Tributes page to make it easy to share your memories.