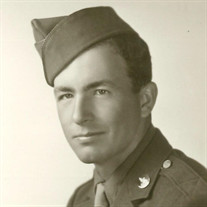 Edward Lee Stewart was born on October 26, 1926 in Fairview, Kansas to John Thomas and Lela Marie Stewart. Edward Lee met his wife, Phyllis Josephine Wileman their senior year at Topeka High School. After graduation, Ed joined the Armed Services during World War II and while on leave he married Phyllis on March 29, 1948 in Lubbock, Texas where Phyllis resided. Ed returned to his base in Hawaii and finished out his tour of duty. They then moved to Amarillo, Texas where they increased their family to include Linda and Jim shortly before moving to Abilene, Texas. Ed worked for several Motor Freight Companies as a Claims Manager and was honored by being awarded Boss of the Year in 1976 by his employees. Ed was warm and caring family man who enjoyed family picnics, swimming, fishing, and camping at State Parks and lakes. He also enjoyed yearly vacations, traveling to Kansas to see his relatives. He liked to garden and had a large vegetable garden. Ed was an avid reader of Western novels. He enjoyed tinkering on his cars and was a good handyman around the house. Ed and Phyllis resided in Lubbock, Abilene, and Waco, Texas, as well as Albuquerque, New Mexico, later retiring to Lubbock, Texas. Ed was the President of the Lubbock Library Genealogy Club where Phyllis and Ed were active leaders of the Genealogy Club helping others research their family origins, as well as creating extensive genealogy records for all the generations of our family to enjoy. Ed and Phyllis were active members of St. Luke's United Methodist Church in Lubbock, Texas before relocating to Broken Arrow, Oklahoma to be closer to their daughter and son-in-law. Ed is survived by his daughter and son-in-law, Linda and Ron Dix of Broken Arrow, Oklahoma and granddaughter, Kendra Stevens of North Richland Hills, Texas. Ed was preceded in death by his wife, Phyllis Stewart, married 71 years, son, James Stewart, brothers, John Stewart, Fred Stewart, Richard Stewart, and sister Eunice Stebbins. Ed was loved by many including his granddaughter, nephews and nieces for his fun, comical, sweet natured, and warm personality. He brought honor, love, security and humor to our family. Ed will be dearly missed and resides in our hearts forever.

The family of Edward Lee Stewart created this Life Tributes page to make it easy to share your memories.

Send flowers to the Stewart family.