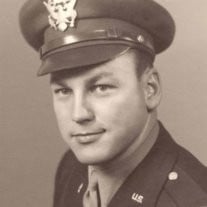 Edwin L. Bechtold, 90, former President of Dover Corporation â?? Norris Division, passed away April 8, 2013. Bechtold was born in Perry, OK, November 2, 1922 to Gladys Belle and Edwin Flynn Bechtold, as the oldest of 5 children. Ed was a graduate of Newkirk High School. Bechtold served in the Army Air Corps during World War II as a 2nd Lieutenant. He was a pilot and flight instructor on B-25s, and was a lifelong aviation enthusiast. After the War, Bechtold obtained a BS in Mechanical Engineering from Oklahoma A&M (aka Oklahoma State â?? Go Pokes!) in 1948. While in Stillwater, he and his beloved bride lived in the Veterans Village with other veterans, including his brothers. Ed began his life-long career in the oilfield equipment industry with Hughes Tool in Houston, TX. Bechtold worked for the Mission Manufacturing Company in Dallas and Houston and opened their plant in Mexico City. In 1968 Bechtold moved to Tulsa to work for Dover Corporation, where he retired as President of the Norris Division in 1986. Ed was a scratch golfer and as a true engineer and artist, he spent many of his retirement years pursuing his love of stained glass. Bechtold is survived by his wife of 69 years, Betty Woolsey Bechtold; daughters Suzanne Estrada and Mary Jane Fahey, both of Tulsa; brother Joseph Bechtold of Littleton CO; grandchildren James J. (Buddy) Estrada of Tulsa, Lisa Wallace of Dallas, TX, Chris Estrada of Houston, TX, Bill Fahey of Chagrin Falls, OH, and Patrick Fahey of Rogers, AR; 10 great-grandchildren and 2 great-great grandchildren. Memorial Services will be held at 12:30 pm, Thursday, April 11, 2013, at Floral Haven Funeral Home, Broken Arrow, OK. In memory of Ed, those that wish may contribute to the Alzheimerâ??s Association, 800-272-3900.

The family of Edwin L. Bechtold created this Life Tributes page to make it easy to share your memories.