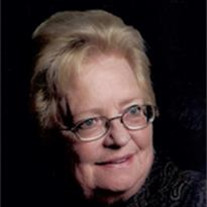 Eileen Lydia Dodd, a resident of Tulsa, Oklahoma ,died on March 9, 2011 at St. John Medical Center after a lengthy illness. Eileen’s companion of 13 years, Donna; her sister, Helen Merritt; and many, many of her close friends were there during the entire time. Stephen Wilson, a close friend to Eileen and Donna, went above and beyond to help them get through a very trying time. Eileen was preceded in death by her parents, Hilda and Ben Merritt. Eileen was also preceded in death by her beloved pets (also known as furry children) Roscoe, One Eyed Jack, Beignet, and Bianca. Eileen worked many years in the insurance business, customer service, administrative assistant, and Working Woman, a company Donna and she owned and operated until her health began to fail. Eillen was a member of Fellowship Congregational Church where she served on many committees and served as Meals on Wheels Coordinator until her health would not allow her, but would help deliver meals whenever she could and continued to ask people to help out. She is survived by her sister, Helen Merritt of Tulsa; Donna Rabel and Brownlee of the home and Betty Rabel who she considered her second mom; and a host of friends too numerous to mention. If you knew Eileen, you knew she was an avid reader, reading at least a book a day, loved nature, classical music, birds, flowers and cooking. After many years of trying to stop smoking she finally achieved her goal. Eileen had not smoked in 5 years but the damage had been done. Her last days were spent trying to tell people to stop smoking, or never to start (you know who you are). Donations to the American Lung Association and the SPCA would be greatly appreciated. A Memorial Service will be held at Floral Haven Funeral Home Chapel on Saturday, March 19, 2011 at 3:00 PM. A reception will immediately follow at the Floral Haven Family Center from 4:00-6:00 PM. Eileen requested that her remains be scattered in New Haven, Missouri where she spent many happy times with her grandmother, and later in life discovered Senate Grove Inn in the same area. This year would have been the thirteenth year for her and her friends to go to Senate Grove Inn, so on June 9, 2011 her remains will be scattered there.

Eileen Lydia Dodd, a resident of Tulsa, Oklahoma ,died on March 9, 2011 at St. John Medical Center after a lengthy illness. Eileen&#8217;s companion of 13 years, Donna; her sister, Helen Merritt; and many, many of her close friends were there... View Obituary & Service Information

The family of Eileen Lydia Dodd created this Life Tributes page to make it easy to share your memories.