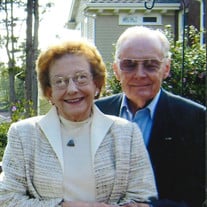 Eileen was born on July 11, 1925, to Walter and Edna Kersten/Peiman in Tacoma, Washington. In 1943 she and her Mother moved to Topeka, Kansas following the death of her father. She worked for the Santa Fe Railroad Co, in Topeka until 1946 where she married Lawrence Wigger. In 1947 she joined her husband in the Coast Guard at Sault St. Marie, Michigan, and later moved to Groton, Conn. as a result of his transfer, where she was employed by the Navy's Under Water Sound Laboratory in New London, Conn. After her husband's discharge from the Coast Guard, they moved to Manhattan, Kansas where he was enrolled at Kansas State University and she was employed by the University Veterinarian Hospital. After her husband's graduation, they moved to El Dorado, Kansas where he was employed by Cities Service Oil Co. In 1968 he was transferred to the Companies Exploration and Production office in Bartlesville, Oklahoma ad she became a "stay-at-home-mom" with the births of Julie and David. The family enjoyed camping throughout most of the 48 states including trips to Alaska and Manitoba, Alberta, British Columbia, and the Northwest Territories in Canada. She was a member of Redeemer Lutheran Church in Bartlesville and Our Savior Lutheran in Tulsa where she was active in Toddler Sunday School Teachings, Meals On Wheels, Ladies Bible Study, and Lutheran Missionary League. Eileen was very fond of classical music and had an abundance of friends in Bartlesville and Tulsa and considered her friends and family to be a blessing from God. In her relationships, her priorities were always directed, without hesitation, to the comfort and desires of family and friends and she sacrificed her own for their pleasure. She always recognized the positive aspect of any situation in life. Her 24kt personality established a confident environment of love and devotion with friends and family and the security of her affection was always apparent. She is proceeded in death by her loving husband Lawrence, her mother, and father, and her daughter Julie. She is survived by, her son David A. Wigger and wife Karen of Tulsa, OK; Bryan and Spencer Grossman of Seattle and granddaughter Rachel Wigger of Tulsa. Prior to their death, Lawrence and Eileen established an Endowment Fund at Concordia Lutheran Seminary in St. Louis, Mo. for married senior students in the name of Henry and Frieda Wigger, his parents. In Lieu of Flowers, the family has requested donations to this fund, The Henry and Frieda Wigger Endowment Fund.

Eileen was born on July 11, 1925, to Walter and Edna Kersten/Peiman in Tacoma, Washington. In 1943 she and her Mother moved to Topeka, Kansas following the death of her father. She worked for the Santa Fe Railroad Co, in Topeka until 1946... View Obituary & Service Information

The family of Eileen G. Wigger created this Life Tributes page to make it easy to share your memories.

Send flowers to the Wigger family.