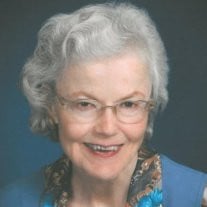 Eleanor Lucile Meck Pontius, 87, was claimed by the Lord into His New Jerusalem on October 19, 2013. Memorial service will be held at The First United Methodist Church, Tulsa, OK, at 10:30 AM, on Wednesday, October 23, 2013, with pastors Ed and Sue Bateman, officiating. Eleanor Meck was born in Bucyrus, Ohio, on June 1, 1926. She graduated from Kent State University in 1948 with a double major in English and journalism. She was an excellent newspaperwoman and worked for several Ohio newspapers after graduation. Eleanor qualified early in the Korean War for a direct U.S. Air Force military commission as Second Lieutenant. She accepted her first salute from her future husband, Birch Pontius. She served as a military reporter for the Wingspread newspaper at Randolph Air Force Base in Texas, near San Antonio. Lt. Meck retained her maiden name during her duties as Women of the Air Force squadron adjutant and commander at Otis AFB, near Cape Cod, Massachusetts. She worked as executive secretary for the Veterans Administration in Indianapolis and retired from public affairs with the U.S. Army Corps of Engineers, Tulsa, in 1996. Eleanor was also a freelance journalist with articles published in various magazines and newspapers. In her leisure time she enjoyed Bible study, playing piano, and reading, especially Agatha Christie mysteries. She was a longtime member of First United Methodist Church, of Tulsa, where she served as a pianist for the Beacon Class and sang with the Cathedral Choir and the Melodears (composed of members over age 60). Eleanor was preceded in death by her oldest daughter, Lisa Reynolds, of Wheatridge, CO. She is survived by her husband of sixty years, Birch Pontius, of Tulsa; son Kevin Dean Pontius, of Tulsa; and daughter Lynnette Pontius Horner and her husband Robert of Centennial, CO. She is also survived by five grandchildren and one great-granddaughter. Memorial contributions may be made to the Beacon Scholarship Fund in care of First United Methodist Church, 1115 S. Boulder Ave., Tulsa, Oklahoma 74119.

Eleanor Lucile Meck Pontius, 87, was claimed by the Lord into His New Jerusalem on October 19, 2013. Memorial service will be held at The First United Methodist Church, Tulsa, OK, at 10:30 AM, on Wednesday, October 23, 2013, with pastors Ed... View Obituary & Service Information

The family of Eleanor M. Pontius created this Life Tributes page to make it easy to share your memories.

Eleanor Lucile Meck Pontius, 87, was claimed by the Lord into...