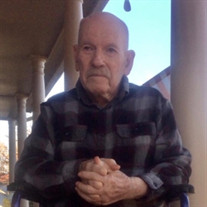 Elmer Junior Mabry, age 85 completed his Spiritual journey to his heavenly home from his University Village home in Tulsa, Oklahoma on March 28, 2020. Elmer was born in Red Oak, Oklahoma on May 13, 1934 to Elmer Lunar Mabry and Nancy Lorene (Harrison) Mabry. He was married to Carolyn (Hicks) Mabry who preceded him in death in 2018. Elmer was a 1953 graduate of Poteau High School. He later earned a BS in Industrial Arts from Southeastern State University, Durant, Oklahoma and taught Auto Mechanics and Woodwork. He earned a Masters from OSU in Trade & Industrial Education with emphasis in Math and was working on his Doctorate at one time. He started his teaching career at Hugo, Oklahoma teaching Jr. High Math and Science where he also had a Radio Broadcast Program for a short time. He then moved back to Tulsa and taught at Edison, McClain, Central, and Webster where he felt he was called to help young people find their way to God through teaching and counseling. Teaching was his passion. Later he taught Real Estate classes at Tulsa Jr. College and later became the Director of Construction Technology at Claremore Jr. College as well as teaching Math in the Military. Elmer was in the Army National Guard of Oklahoma and was a Staff Sergeant in the U. S. Army. He was a Counselor for Tulsa Vo-Tech at one time and a member of Full Gospel Business Men's Fellowship. After retirement from teaching, Elmer acquired his Real Estate License and also worked in home remodeling and classic car restoration. He became a Christian at age 11 while attending Poteau First Assembly of God Church. Elmer later became the President of the Christ Ambassadors Youth Group, taught Sunday School, sang and played the guitar and spoke at any church that would ask him. He helped build an AOG church on Highway 69 near Poteau as a youth. Elmer was a long time member at Victory Christian Center. Elmer is survived by his only son, David Keith Mabry, Coweta, OK; step-daughter Karen Hardin (Kevin) Coweta, OK; Step-son Steve Dee, Finksburg, MD; Step-son Ron Dee, Tulsa, OK, sister Beverly Davis, Poteau OK, sister Judy Foster, Cushing OK, brother John Mabry, Owasso OK, sister Hazel Mabry, Poteau OK, sister Gloria Boyd (Jim "Baldy") Broken Arrow, OK, Grandchildren: Shelby Hammett (Dan), Salem, CT; Colton Mabry, Salem, CT, Peyton, Preston and Pearston Mabry, Coweta, OK; Michael Hardin, Tulsa, OK, Joshua Hardin, Coweta, OK; Holly Sparger (Matthew), Broken Arrow, OK; Chris Dee (Lesia), MO; Cindy Dee, MO; Ashley Dee, Austin Dee and Alyx Dee, MD; also Great Grandchildren Dominic Sparger, Calista Morgan, Kirsten and Karson Dee, Dakota Morris (Emily); Kelsey Morris. One Great Great grandson Hudson Morris. Elmer is loved and remembered by many nieces, nephews, relatives and friends. Elmer was good-natured, well-rounded, and very humorous. Everyone who knew him knew that he was the King of "corny jokes." He laughed at his own jokes harder than anyone. Elmer was always upbeat with his positive attitude and never complained. He was a true believer that lived by the Word of God. Elmer was preceded in death by his wife, Carolyn Hicks Mabry; parents, Elmer and Lorene Mabry; Granddaughter, Stacia Mabry. Our family would like to say thank you to other family members and friends for all your prayers and condolences during this time. We would like to say thank you to all the Administration and Staff at University Village for the loving care they gave to Elmer during his time of living there. Webcasting available at: http://webcast.funeralvue.com/events/viewer/31737/hash:6C93A81CB11700E3

Elmer Junior Mabry, age 85 completed his Spiritual journey to his heavenly home from his University Village home in Tulsa, Oklahoma on March 28, 2020. Elmer was born in Red Oak, Oklahoma on May 13, 1934 to Elmer Lunar Mabry and Nancy Lorene... View Obituary & Service Information

The family of Elmer Mabry created this Life Tributes page to make it easy to share your memories.

Send flowers to the Mabry family.