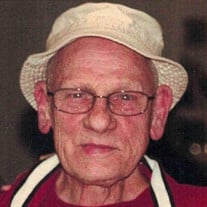 Elmer Lee Terrell was born on August 19, 1937 in Claremore, Oklahoma to Clyde and Clara Terrell. Elmer and his 6 brothers and sisters grew up in Jenks where he lived and attended school until he went into the Marines Corp. After being discharged from the Marine Corp he moved to the Tulsa area where he met and then married Brenda Sue Brown on July 1, 1961. Elmer and Brenda settled in Tulsa where they raised 2 children, Tina Marie and Tony Lee for the next 59 years. In the early years Elmer worked as a tree trimmer, building foundations in the construction industry until going to work in the Oil & Gas Industry where he worked for over 25 years. In the mid 80’s he went to work for Air Exchangers as an inspector where he worked until his retirement in 2010. Elmer loved being a father and spent many years attending dance recitals, softball games as well as coaching baseball and being a proud member of Whitney Jr High school and Hale Sr High School booster clubs. Most Friday night football games you would find him on the field helping with the line chains or anything else that was needed, proudly wearing his Tony’s Dad booster coat. Elmer was very handy at just about everything. He loved to just be “tinkering around” spending many hours working on cars, building something around the house, putting in a new patio or planting a new garden. If he got bored you would find him in the garage moving things around to a new spot, once again. Elmer loved to watch sports, whether in person or on TV but his favorite team was the OU Sooners. He was a huge Oklahoma Sooner’s fan. You would almost never see him without his OU Hat or jacket on. Most of all Elmer loved spending time with and being surrounded by friends and especially his family. Getting together with his siblings and their families, his grandkids and his great grandkids made him so happy. The happiest times of his life where spent being surrounded by the people he loved. Elmer loved anything to do with history, loved to look at maps or old pictures as well as watching old movies, especially westerns. He was the family historian and if any one of us could not remember something that had occurred or a date of an event, we would call Elmer and he would tell us all the details. He never forgot any detail, where that old cemetery is, or which historical marker was on what highway. Elmer passed from this life on October 29, 2020 at the age of 83. He was proceeded in death by his mother and father, 5 siblings, his wife of 50 years, Brenda and his son, Tony. He is survived by his daughter, Tina and her husband Doug, Grandsons Zachary and Michael and his wife Samantha, Granddaughters Sarah and her husband Devin, Nikole and Danielle, Great-granddaughter’s Bently and Paityn and grandson’s Cullen and Shane along with many nieces and nephews. Elmer was a good man, hard worker and a trusting friend to many. He never met a stranger and treated everybody the same with kindness and respect. You could always count on him to lend a hand to anyone and everyone, share a meal or a kind word. To his family he was the best brother, uncle, Dad and Papa any of us could wish for. We love you so much Papa and will miss you more than words can express until we are together again.

Elmer Lee Terrell was born on August 19, 1937 in Claremore, Oklahoma to Clyde and Clara Terrell. Elmer and his 6 brothers and sisters grew up in Jenks where he lived and attended school until he went into the Marines Corp. After being discharged... View Obituary & Service Information

The family of Elmer Lee Terrell created this Life Tributes page to make it easy to share your memories.

Send flowers to the Terrell family.