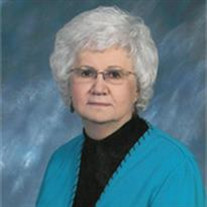 Elva June Chambers was born to Marshall Earl and Helen Keller Davis on July 2, 1930 in Prescott, Arizona.Â  She moved to SE Kansas with her family when she was five years old.Â  JuneÂ graduated Â from Edna High School in in 1947 and attended Coffeyville Jr.Â College until she began work as a paralegal secretary.Â  She marriedÂ WillardÂ L. Chambers in 1953 afterÂ going steadyÂ with him three years.Â  They began their married life in Corpus Christi, Texas and then while pregnantÂ with their third child, relocated to Tulsa, Oklahoma in 1959 to be closerÂ to their families. June worked as an executive legal secretary and an office administrator forÂ  many years and took great pride in her work until she retired in 1992.Â  She was a person who was truly interested in other people and she loved to socialize.Â  Her friends and family often teased her that she met someone she knew wherever she went. June lost her husband in 2000 and moved from her family home into assisted living in 2007.Â  She never stopped making new friends and offering a smile and positive support to those around her.Â  She was a member of Woodcrest Freewill Baptist Church in Catoosa, Oklahoma. June is survived by her siblings Harry Davis and wife Louise of Coffeyville, Ks and Rosa Lee Calvert of Claremore, Ok, two of Willard’s children Barbara Christmann and her husband Chris ofÂ  Claremore, Ok., and Dean Chambers and spouse Barbara Kay of Broken Arrow, her children, William Chambers of Bellingham , WA, Daniel Chambers and wife Kathy of Bixby, Ray Chambers and wife Tracy of Broken Arrow, Ok, and Sharon MillerÂ  and husband Jeff of SandÂ  Springs:Â  twelveÂ  grandchildren , Scott Christmann, Deena Ward, Aaron Chambers, Adam Chambers, Jennifer Lucas, Kristin Chambers, April Thomas, Jessica May, Rachel LeakÂ , Austin Chambers, Jami Miller and Brandon Chambers, as well as eleven great-grandchildren and two great-great-grandchildren. June passed away on July 5, 2012 surrounded by family.Â  Her sweet smile, melodic voice and supportive nature will be deeply missed by those who knew and loved her.

Elva June Chambers was born to Marshall Earl and Helen Keller Davis on July 2, 1930 in Prescott, Arizona.Â  She moved to SE Kansas with her family when she was five years old.Â  JuneÂ graduated Â from Edna High School in in 1947 and attended... View Obituary & Service Information

The family of Elva June Chambers created this Life Tributes page to make it easy to share your memories.