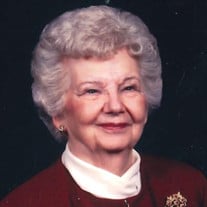 EMMA LAURA (ABERCROMBIE) RAGSDALE December 21, 1922 - July 25, 2020 “...the fruit of the Spirit is love, joy, peace, patience, kindness, goodness, faithfulness, gentleness, self-control” Galatians 5:22 Emma Laura (Abercrombie) Ragsdale was called to heaven by God on Saturday, July 25, during surgery for a broken hip. She was born December 21, 1922, in Robertsdale, Alabama, to Linnie Killingsworth Abercrombie and Rev. Mabrey Clayton Abercrombie. Her mother, Linnie, died when Emma Laura was six months old. When Emma was three, her father married Sara Apperson.Since Emma Laura’s father was a Methodist minister, they moved several times during her childhood, including to Selma, AL, East Tallahassee, AL, Pollard, AL, and Calvert, AL. When she was 6, they moved to Clint, TX, for her father to serve the west Texas conference. When they arrived at the adobe house “parsonage”, Emma cried because she thought that a house made of “mud” would wash away when it rained. She got to have a horse she named Gigi when she was 8. It cost $10 and came with a saddle and reins. She had a choice of a bike or a horse for the same price. She also had a bulldog, Bozo, a cat and a canary and took them in the back seat of the car when they moved to Bixby, Oklahoma. When Emma was in junior high, her dad was assigned to Epworth Methodist Church in Tulsa. She started Webster High School in Tulsa and that’s where she met the love of her life, James E. Ragsdale. She played the clarinet and Jim played the French horn in the school band. Jim was their paperboy, and he arranged his route so that Emma’s family was the final stop on his route. Every day Emma’s mom had cookies for him. They were boyfriend and girlfriend when they graduated in 1941. Emma went to Central State College in Edmond. Jim joined the Navy and served three years on ships in the Pacific. When Jim was discharged, he came straight to Tulsa and he and Emma Laura were married 3 days later on July 17, 1945. The satin for her wedding gown was provided by a local funeral home as satin and silk was otherwise not available during the end of the war. After Jim was discharged from the Navy, they made their home in Tulsa where they stayed all of their lives. Emma worked as a teaching assistant in Tulsa Public Schools and then spent 14 years working for the Administrators of Oklahoma Methodist Manor from 1967-1980. They built their Methodist Manor garden home in July 1986. When they both retired, they traveled frequently across the United States, and Canada. Traveling in their motor home with good friends was their favorite form of travel, to places including, Colorado, Wyoming, Montana, Grand Canyon, Niagara Falls, Bangor Maine, and Yellowstone. They also took the train across Canada and traveled on many OMM trips. Emma remained very involved at Oklahoma Methodist Manor after Jim passed away in 2001. In addition to spending time with her family and friends, she volunteered on the campus, doing the purchasing and coordinating for the previous on-campus gift shop, helping with the holidays and special events on campus and serving as a tour guide. She was an avid gardener who took pride in her beautiful courtyard and corner garden at her patio home. Having lived at the Manor for 34 years, Emma was the longest tenured independent resident. She always felt right at home and valued the sense of security, belonging and deep friendships. Emma lived her entire life as a humble follower of Christ and was an inspiration and friend to everyone who met her. She blessed others as she reached out to people with joy, love, kindness and hospitality. She loved unconditionally and thought of others before herself. Even in her final two days in the hospital waiting for hip surgery, she was cheerful, optimistic and thinking of others. The hospital care providers instantly fell in love with her as she inquired about them and their families.Emma Laura and Jim had two daughters, Lynn Marie Stevens (Jim), and Sara Ann Bailey (James). In addition to her daughters, Emma Laura is survived by her four grandchildren, Michael V. Phenicie (Melissa) of Tulsa, OK, David R. Plant (Brynne) of Ponte Vedra Beach, FL, Brett Stevens (Myla) of Perkins, OK, and Laurel Stevens Conley (Jordan) of Dallas, TX, and eight great grandchildren, Kaitlyn Phenicie Ward (Grant), William M. Phenicie II, Michael V. Phenicie II, Emma Loree Plant, and David Ryan Plant II, Noah Conley, Vanessa Conley, and Quinn Stevens. To honor Emma, memorial gifts may be made to Oklahoma Methodist Manor, for the OMM Employee Assistance Fund or the OMM Supplemental Aid Fund, 4134 E 31st St., Tulsa, OK 74135

The family of Emma Ragsdale created this Life Tributes page to make it easy to share your memories.

Send flowers to the Ragsdale family.