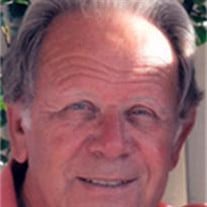 Erwin Karl Reiff, Tulsa, 71 years young, passed away at his home Friday, August 13th 2010. Erwin was born to Karl and Linda Reiff on February 28, 1939, in Germany. Erwin attended trade school and then Graphics Art School in Stuttgart to learn color reproduction and dot etching techniques. Erwin worked in Germany, Holland, Switzerland and then immigrated to the United States with his family in 1969.Â  After a year in Oklahoma City, the Reiff family had a choice to live in Honolulu or Tulsa. The family decided to stay and make Tulsa their home where Erwin continued to work in his trade at UNIGRAPH for another 33 years, retiring as Vice President in 2004. Erwin married Elke in November of 1962. They had three children, Michael, Matthias and Oliver. Elke passed away in 1992. He married his second wife Basia in 1996 who passed away in 2002. His last partner Jan Pastor, passed away in 2009. All three women succumbed to Cancer after very valiant fights.Â  Erwin was an avid Gardener who loved being outdoors. He loved all variety of animals and in Broken Arrow lived on a Farm with cows, horses, dogs, chickens and a huge garden. He loved to Travel. He was a collector of fine wines, he enjoyed good beers and arguing politics at his Stammtisch. Most of all Erwin loved people and his generosity had no limits. He was an exemplary of rising to any challenge and always remaining optimistic throughout its duration. This is his Greatest gift to those who knew and loved him.Â  He is survived by his three children, Michael Olaf of Florida, Matthias Marco of Tulsa, and Oliver O’Brien with his wife, Rebekah, grandchildren Ian, Emma, and Aiden of Broken Arrow. And his Sister Gerlinde of Germany.Â  Memorial Service 12:30 pm Monday, August 16th at Floral Haven Tulsa, OK. With reception immediately following. Friends may honorÂ Erwin’s memory with contributions to: The American Cancer Society. In lieu of flowers.

The family of Erwin Karl Reiff created this Life Tributes page to make it easy to share your memories.