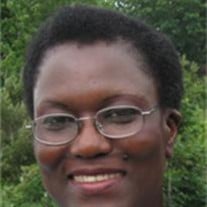 A Life Celebrated Born, Monday, April 11, 1955 to Melville Alphonse, Sr. and Janet Elfreida Lewis, Estelita Rosemarie was welcomed into a family of love. On Wednesday, February 22, 2012 she went to be with Our Lord leaving behind a legacy of strength, love and faith. Estelita attended St. Anne’s primary in Sierra Leone before graduating from St. Joseph’s secondary school for girls. After graduation, she began working at the Catholic Relief Services, where she met Percy Johnson Brown. Their courtship was anything but common. He was the “rabble-rousing American” and she was the gem. The courtship blossomed into love and on June 7, 1975 at Sacred Heart Catholic Church in Freetown, Sierra Leone, the two were joined in marriage. After commissioning by the Board of Global Ministries, a UMC Mission Board, Percy and Estelita served as missionaries for 4 years in her homeland of Sierra Leone. Then on October 27, 1980, Percy and Estelita welcomed into their lives their first daughter, Natasha Malaika, in Carbondale, Illinois. Soon after, nearly two years to the day, came their second daughter, Tchoia Jonelle, on October 25, 1982 in Denver, Colorado. Estelita had a sharp, creative and engineering mind, resulting in a promotion within AT&T and the family moving to Georgia. In 1989, Estelita found herself once again home but this time with two children who were in for an adventure. During her “motherhood” years in Freetown, Estelita worked in the consul’s office at the American Embassy until returning to the States in 1991. She worked in Little Rock, Arkansas at MetLife until her transfer to Tulsa, Oklahoma in 1997. Estelita loved to work with her hands and coming up with new projects. She could often be found in the midst of one of her three favorite, on-going projects: gardening and landscaping, home improvement or winemaking. But she also loved serving others. Estelita was preceded in death by her parents and two younger siblings. She leaves behind her husband of 36 years, Percy; her daughter, Tchoia; her daughter and son-in-law, Natasha Brown and Spencer Beezley; grandchildren, Quinton and Savannah Beezley; her sisters, Melrose, Melvina and Valeria and her brother, Melville. With them, many aunts, uncles, nieces, nephews, cousins and friends. Visitation will be Friday evening, March 2 from 6:00 to 9:00 p.m. at 2608 West Atlanta Court. The memorial service will be at 1:00 p.m. on Saturday, March 3 at Faith UMC (7431 East 91st, Tulsa, Oklahoma 74133) with Pastor Erma Pregler officiating. In lieu of flowers, memorial contributions may be made to: Cancer Treatment Centers of America Southwestern Regional Medical Center;Â 10109 East 79th Street, Tulsa, OklahomaÂ  74133

A Life Celebrated Born, Monday, April 11, 1955 to Melville Alphonse, Sr. and Janet Elfreida Lewis, Estelita Rosemarie was welcomed into a family of love. On Wednesday, February 22, 2012 she went to be with Our Lord leaving behind a legacy of... View Obituary & Service Information

The family of Estelita Rosemarie Brown created this Life Tributes page to make it easy to share your memories.