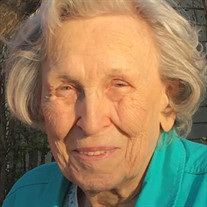 Esther Anne Smysor ,98 otherwise known as 'Granny' to her family, passed on May 21, 2021. She was born on October 20, 2021 in Isabel, South Dakota. Esther was the second eldest of 4 sisters to John and Sophie Ehly. She is survived by Margaret Stadel of Mobridge ,South Dakota. After graduating from Isabel High School, Esther moved to Los Angeles, California to join her sister Violet. She worked at Lockheed aircraft where she met and married Alfred Jacob Smysor. Their first child, Stephen was born in California. They moved to Bartlesville, Ok, home town of Alfred, where he went to work with Cities Service Oil Company. Daughter Mary Lou Wheeler was born in Bartlesville. The family lived for a while in Houston but returned back home to Bartlesville with Cities Service Oil Company. Esther became a Realtor and also was a homebuilder. She worked for a number of years, first in Bartlesville then in Tulsa until retirement at 59. Her hobbies included being an excellent cook and a skilled seamstress. Green Valley, AZ became the retirement city for Alfred and Esther for 15 years, until his passing. She loved the desert and the easy lifestyle of the retirement community. Their home had beautiful views of the mountains. Family trips to Steamboat Colorado turned into summer stays in the mountains where they shared several weeks of the summers with their grandchildren, Shelly and Jacob Wheeler, and Sarah and Sydney Smysor. Esther returned in 1997 to once again make Tulsa her home. She loved attending Kirk of the Hills Presbyterian Church. She served with Meals on Wheels as long as she was able to drive at 85. Many times she would be assisting others who were actually younger than she! Her tenacity to live such a long life related to her desire to know and be remembered by her Great Grandchildren. A strong woman, she lived a long, full life. She is now at peace and with the Father. She is now with many loved ones who have gone on before, through the sacrifice of Jesus that we might live in eternity because He first loved us! Surviving family members, Daughter, Mary Lou Wheeler, Granddaughter Shelly Marie Wheeler, Grandson, Jacob Thomas Wheeler, Wife Angela Wheeler, Granddaughters Sydney and Sarah Smysor, Great Grandchildren, Cassie Watson, Shyanne Wheeler, Jackson Wheeler, Trae Wheeler and Ellianna Wheeler. Graveside Services for Family will be Thursday, June 3, 2021 at Memorial Park Cemetery in Bartlesville ,Ok.

Esther Anne Smysor ,98 otherwise known as 'Granny' to her family, passed on May 21, 2021. She was born on October 20, 2021 in Isabel, South Dakota. Esther was the second eldest of 4 sisters to John and Sophie Ehly. She is survived by Margaret... View Obituary & Service Information

The family of Esther Anne Smysor created this Life Tributes page to make it easy to share your memories.

Send flowers to the Smysor family.