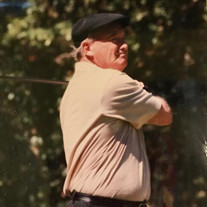 Brumble – Eugene, “Gene”, 90, passed away on Wednesday, January 15th, 2020 at St. Francis Hospital in Tulsa, OK surrounded by his family. He was born on January 28, 1929 in Dixon, Missouri, the third of four children, to Otto Brumble and Martha Ellen (Baker) Brumble. His family moved to Tulsa when he was 5 years old. He attended school in Tulsa and married the love of his life, Patricia Murphy on December 12, 1947. They became entrepreneurs starting their own companies. They achieved great success allowing them to retire at age 51. He was excellent at everything he did. He was an avid bowler, loved camping and fishing, enjoyed travelling across country in their motor home, but most of all, he loved playing golf. He played in Tulsa and the surrounding area but also participated in golf tournaments in several other states. He shot his age or better 688 times during the last 40 years. He was a man of faith and most influenced by the power of prayer instilled in him by his mother. Outside of his faith and love for Jesus, his family was his greatest joy and he never missed the opportunity to attend the children’s sporting events, family gatherings or a simple lunch or dinner. He attended Beams of Light Family Church and Sunday Sessions. He was preceded in death by his parents; his loving wife of 67 years, Patricia A. Brumble; his brother, Wayne Brumble and wife, Margaret; and his sister, Genevie Cole and husband, Carl. His loving family members include his brother, Bob Brumble and wife, Sherry; daughter, Connie Black; son, Danny Brumble and wife, Paula; 5 grandsons, Steve Black, Dustin Black, Clint Brumble, Kyle Brumble, Curtis Brumble; 11 great-grandchildren and numerous cousins, nieces and nephews. Private internment at Floral Haven Cemetery. A Celebration of Life Memorial Service will be held at 1:45 p.m. on Sunday, January 26th, 2020 at Sunday Sessions, 6808 S. Memorial Dr., Suite 226. In lieu of flowers, contributions can be made to Sunday Sessions, PO Box 209, Owasso, OK 74055.

The family of Eugene Brumble created this Life Tributes page to make it easy to share your memories.

Send flowers to the Brumble family.