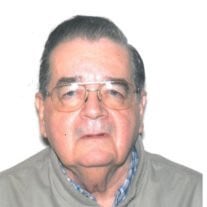 Dr. Gene Fingerlin, 75 of Bixby passed away on April 28, 2013 in Tulsa. Gene was born on December 29,1934 in Tulsa when his mother went into labor at a hockey game and Eugene Fingerlin Jr. was born. His parents were Agnes Louise Tyner Fingerlin of Bernice, OK and Eugene Fingerlin, an immigrant from the Black Forest in Germany. As a toddler, “Little Gene” was stricken with polio, and had to learn how to walk again with one leg somewhat shorter than the other. He developed good manual dexterity, through, which aided him when he later became a veterinary surgeon. He attended Eliot Elementary and Horace Mann Jr. High School, which later became a correctional institute, around 12 years of age he got a job working on Shady Creek Farm in Tulsa. He eventually worked up to 25 cents an hour, working with cattle, and became interested in animals. He graduated from the historic Central High School in Tulsa in 1952. After a year of college, he obtained a ranch hand position at the Wyoming Hereford Ranch near Cheyenne, Wyoming. They raised beef cattle, and he even accompanied some of the show cattle on the coldest train ride of his life through Ogden, Utah. He decided to enlist in the Army in January 1954, and was eventually stationed in Karlsruhe, West Germany. In Germany he met his wife , Brunhilde, of the Black Forest town, Dossenbach, and they married on March 31, 1956. After returning to the states, he worked as a delivery driver for auto parts, and began to want better things for himself and his family so he went back to school attending Oklahoma State University and eventually graduated from the College of Veternary Medicine in May 1963. He worked for other veterinarians for a time, in mixed practices. He then began his own hospital in Tulsa where he concentrated on small animals. In 1972 he moved to a suburb of Tulsa named Bixby and opened Bixby Small Animal Hospital. He was very active in the state and local veterinary associations and served as Chairman of the Legislative Committee of the Oklahoma Veterinary Medical Association for many terms. He worked with the Boys Scouts for many years, beginning in the 1960s as scoutmaster, through the mid-1980s, when he served as Veterinary Explorer Post Advisor on several occasions. In 1982, he received the Silver Beaver Award, which is the highest award an adult leader can achieve in the Boy Scouts. In 1989, Dr. Fingerlin was presented the OVMA’s Companion Animal Practitioner of the Year Award. Then, he was honored to receive the 1995 OVMA Veterinarian of the Year award recognizing his achievements and service. Dr. Fingerlin is survived by his wife, Brunhilde, son Jim, son John and daughter-in-law Deanna, daughter Karen, and three grandchildren, Justin, Polly, and Jenna Louise, sisiter, Ann Little, brother, John F. Fingerlin and wife Sandy.

Dr. Gene Fingerlin, 75 of Bixby passed away on April 28, 2013 in Tulsa. Gene was born on December 29,1934 in Tulsa when his mother went into labor at a hockey game and Eugene Fingerlin Jr. was born. His parents were Agnes Louise Tyner Fingerlin... View Obituary & Service Information

The family of Eugene “Gene” Fingerlin created this Life Tributes page to make it easy to share your memories.