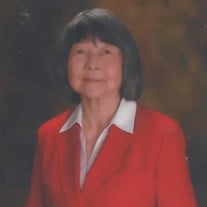 Evelyn Teiko Igarashi Blaylock, born on June 16, 1928, in Honolulu, Hawaii, passed peacefully from this life on December 6, 2020, in Tulsa, Oklahoma. She is survived by her loving husband of 64 years, James Edward Blaylock; devoted daughters Bettye Blaylock, Bonnie (Ron) Parks of Tulsa and Barbara Blaylock (Joe Edwards) of Dallas, TX; grandchildren Justin Micah Smith, Keenen Smith Mushrush (Scott), and Jordan Mark Smith (Ashley), all of Tulsa; Samantha Parks Salisbury (Luke) of Kansas City, MO; Luke Edwards and Lily Edwards of Dallas, TX; great-granddaughters Scout Mushrush and Ella Smith of Tulsa; and sister Betty Black of Honolulu. Evelyn was preceded in death by her parents, Asao and Toyota Igarashi; her parents in-law, Bessie and Keener Blaylock; brothers Larry Igarashi, Kenneth Igarashi, Richard Igarashi, and Ed Igarashi; sisters Marion Ono, Sally Kohatsu, and Esther Kono. Evelyn was the youngest daughter of eleven children born to Asao and Toyota Igarashi, nine of whom survived to adulthood. Her father immigrated from Japan to Oahu, Hawaii to work as a laborer in the sugar cane fields. Her mother arrived later from Niigata, Japan, as a picture bride. Evelyn’s parents raised their family in the plantation housing of the local sugar mill in Aiea, Hawaii, situated on a hill directly above Pearl Harbor. As a young teen, Evelyn was an eyewitness to the attack on Pearl Harbor and had the unique experience of being Japanese in Hawaii during that tumultuous time. Post high school, Evelyn became a diploma nurse after attending the Queen’s Hospital program in Honolulu. She attended the missionary-run Methodist church, which later awarded her a nursing scholarship.to Vanderbilt University where she obtained her BSN. There she met fellow student and Tennessee native, James Edward Blaylock, recently returned from the Korean War. They were married on December 26, 1955 and this year would have celebrated their 65th wedding anniversary. Their first home was in Nashville, where James worked in engineering and Evelyn as a full-time nurse. Upon marrying James, Evelyn gained a much-loved second family. She said that Bessie and Keener treated her as their own. She will be interred beside her dear in-laws. After 11 years and 3 daughters, the family moved from Nashville to Dearborn Heights, Michigan, with James’ new job at Ford Motor Company. Evelyn continued to work, teaching nursing classes at Henry Ford Community College and working at the Veterans Hospital. After 6 years in Michigan, the family moved to Tulsa with the planned build for the Ford Glass plant. Evelyn continued nursing, taking private assignments and teaching classes in the Hillcrest Nursing Program. The next move with Ford took the couple to El Paso, Texas, where they enjoyed the culture and sights of the surrounding area. They greatly enjoyed sharing their new home with visiting family and friends. Evelyn took Spanish language lessons and delighted in communicating in the language of the locals. With a return to Tulsa and James’ retirement from Ford in 1993, extensive road trips became one of their favorite pastimes. Their travels took them across the continental US. Evelyn’s love of her native Hawaii never diminished, with many trips back home to visit her treasured Ohana. Tulsa summers were spent in garden along with fun filled get togethers, pool parties and BBQs for family and friends, always accompanied by delicious food prepared fresh from their garden. Memorable Friday night card games had a scheduled break for good food and laughter. Evelyn and James moved to Zarrow Pointe in 2019, where they enjoyed the camaraderie of a retirement community. The matriarch and the true heart of the family, Evelyn was meticulous and demanding of herself and others. With a heart for the Islands and her Japanese heritage, Evelyn’s life force and unique personality were so bright that it drew others to her. Evelyn’s heart overflowed with her love for God, her family, and friends. In the tradition of Japanese mothers, her messages could be delivered in a blunt manner, yet always backed with good intentions or tempered with her trademark charm. And while she endured hardships, she maintained an attitude that continued to be curious and interested in others and the world around her. Her family simply adored her and will miss her indomitable spirit, grace, and guidance every day. Her tremendous legacy and influence will continue to be evident in her family as we live with her example as our touchstone. Evelyn’s well-lived life was full and abundant. She was, and will continue to be, most beloved.

The family of Evelyn Teiko Blaylock created this Life Tributes page to make it easy to share your memories.

Send flowers to the Blaylock family.