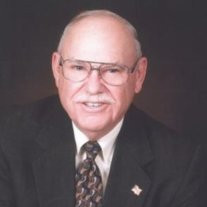 F. Lee LeBlanc, retired Baptist pastor and a former resident of Sapulpa OK on October 24, 2013 was reunited with his wife Betty Anne and daughter Frances Anne Ledford in that Sweet Beulah Land. He was born to Isaac J. & Marie LeBlanc in Pelly (Baytown), TX on February 24, 1930 who both preceded him in death. He is survived by daughter Stephanie L. Wallace of Hallett OK; sons Bruce L. LeBlanc of Richard A. LeBlanc of Porter OK, a sister, Joyce Henderson of DeQuincy, LA; 17 grandchildren and 10 great-grandchildren. He retired from the US Air Force and the US Immigration and Naturalization Service. Known as “The Preaching Sergeant, “ he was licensed into the ministry while in the Air Force and ordained in 1971. He had the honor of worked with foreign missionaries over 3 years and was Chaplain of the Non-Commissioned Officers Association of America (representing our 5 military branches). Upon retiring from the Air Force, he served in various home mission ministries, i.e. Director of a Servicemen’s Center and a personal counseling ministry at an alien detention center near Brownsville, TX, at which time he was also the Religion Editor for a Brownsville TX community newspaper. His pastorates includes Bethany Missionary Baptist Church in Tulsa; Emmanuel Missionary Baptist Church in Sapulpa, plus churches in Brownsville, TX; Columbia and Pontiac, SC; and Peru, IN. He supped-pastored churches in OK, TX, SC, GA, AR and Interim Pastor of Southern Hills Baptist Church in Sapulpa OK. Bro. Lee’s Christian Education includes Christian Theology from Bible Baptist College: US Air Force Chaplain’s Personal Counseling from Air University, and other studies from Moody Bible Institute and Mercer University. For 8 years he was president for the Creek County (OK) Chapter of the National Association of Active and Retired Federal Employees (NARFE) and Chapter Service Officer and Chaplain from 1993 unto his death. In 2004 NARFE honored him as their “Everyday Hero” in a full page article in their March national magazine. He was a former member of the Board of Directors and a volunteer driver for Creek County Retired Senior Volunteer Program (RSVP). In year 2000 he was nominated for the Red Cross “Everyday Hero Award” in the Community Volunteer Category, and in 2002 honored with the Blue Cross Blue Shield “Ageless Hero for Against the Odds Award.”

F. Lee LeBlanc, retired Baptist pastor and a former resident of Sapulpa OK on October 24, 2013 was reunited with his wife Betty Anne and daughter Frances Anne Ledford in that Sweet Beulah Land. He was born to Isaac J. & Marie LeBlanc in Pelly... View Obituary & Service Information

The family of F. Lee LeBlanc created this Life Tributes page to make it easy to share your memories.