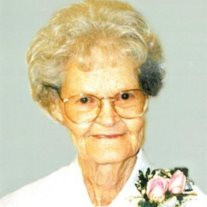 Farrah Belle Tice was born February 26, 1915 in Ft. Worth, Texas. Her parents were Francis (Frank) Lee Tice and Arie Mae (Coble) Tice. She had two elder brothers, Horace and Bennie. Shortly after her birth, the family moved to Oklahoma City, Oklahoma, where she spent her growing up years, graduating from Captiol Hill High School. While in high school, she excelled in swimming and diving. After high school, she went to work for the Williams Candy Company. During this time, she met her future husband, Roy Houston Yarborough. They married August 29, 1936 and spent the next sixty-three years together. The marriage produced four children: JoAnn (Yarborough) Newland, born on 1/18/1939, Janice Marie (Yarborough) Brown, born on 10/30/1942, Joyce Kay (Yarborough) Mayberry, born 1/28/1948, and died 5/18/1968, and Roy Lee Yarborough, born 3/22/1953, died 9/8/2008, also 8 grandchildren and 12 great-grandchildren. Farrah and Roy lived in Jenks the past 45 years of their marriage where Farrah was a homemaker and later a switchboard operator at the Children’s Medical Center in Tulsa, Oklahoma. She was a member of First Baptist Church of Jenks. Farrah will be best remembered for her kind and loving ways, always putting others first.

The family of Farrah Belle “Tice” Yarborough created this Life Tributes page to make it easy to share your memories.