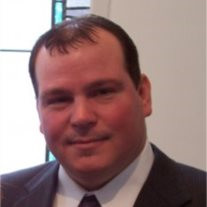 Mr. Ferris DeRouen of D’Iberville, MS and long time resident of Broken Arrow, OK passed away on 28 February 2013 at 47 years of age. Ferris was born on 27 August 1965 the son of Ferris and Jackie DeRouen from New Iberia, LA. and Brenda Viator from Dâ??Iberivlle, MS. He is survived by his wife Tammy Gingerella DeRouen, Sisters Gina Sotak from Dâ??Iberville, MS, and Angel DeRouen of New Iberia, LA , Carla Dworaczyk of New Iberia, LA, Brothers: David Comeaux from Dâ??Iberville, MS and Rocky DeRouen from New Iberia, LA. His son Trey Christensen (wife Brandi) of Mountain Home, ID. Also, many nieces, nephews, cousins and friends. He graduated from D’Iberville High School and was a valued member of the high school football team, class of 1984. He served in the United States Army as an Infantryman, a successful security manager, engineer, and project manager.Ferris married Tammy on December 22,2003 in Tulsa, OK . He was a long time resident of Broken Arrow, OK where he enjoyed spending time with his wife, playing with Nick his dog, playing video games to all hours of the night, enjoying a great new movie with his friends, and traveling. His life was a delightful story of love, passion, caring, commitment, and love of friends. He never knew a stranger, and was a friend who could always be counted on for help and support. He was truly a blessed man with a love for life, adventure, and family. He had the stature of a giant and heart of lamb. All who knew him loved him and enjoyed his playful nature.Funeral services will be held on Tuesday, March 5, 2014 at 10 a.m. at Floral Haven in Broken Arrow. Follow on services will be held in Biloxi, MS for his friends and family on the coast. He will be forever missed by his wife, parents, friends, and all that knew him. God called home his best to be with him in heaven

Mr. Ferris DeRouen of D&#8217;Iberville, MS and long time resident of Broken Arrow, OK passed away on 28 February 2013 at 47 years of age. Ferris was born on 27 August 1965 the son of Ferris and Jackie DeRouen from New Iberia, LA. and Brenda... View Obituary & Service Information

The family of Ferris Joseph DeRouen created this Life Tributes page to make it easy to share your memories.