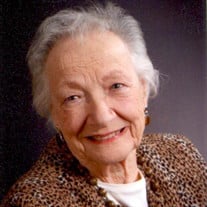 Flora Fitzpatrick Seidl, 96, of Broken Arrow, OK, died December 5, 2020, at her home. Flora was born March 13, 1924, in Dwight, IL, the daughter of Margaret and Bernard Fitzpatrick. She had two older brothers, John and Albert Fitzpatrick. After graduating from Dwight Township High School in 1942, she moved to Chicago to work as a comptometer operator. She married Otto J. Seidl on September 29, 1945. She had three daughters, Patricia, Marilyn, and Carol. Flora was a homemaker, leading Girl Scout troops, volunteering in schools and civic organizations, and supporting her family during 12 moves across the country from northern Indiana to Massachusetts, to Tennessee, to Michigan, to New Jersey, to Ohio, then back to New Jersey. In 1976, the Seidls moved to Broken Arrow, where they remained after retirement. Flora was an active member of Indian Springs Country Club, where she played golf and bridge, and was a member of St. Stephen’s United Methodist Church. Flora was preceded in death by her husband of 70 years, her brothers, and her parents. She is survived by daughter Pat and husband Joe Staggs of Ijamsville, MD; daughter Marilyn Sobwick of Bluffton, SC; daughter Carol and husband Mickey Maus of Tulsa, OK; grandson Bob and wife Tara Bennett of Parkville, MO; grandson Jim and wife Gina Bennett of New Market, MD; grandson Stuart Maus of Tulsa, OK; grandson Gregory and wife Destiny Maus of Bloomington, IN; and five great-grandchildren. A celebration of her life will be 2:00 pm, Friday, May 28, 2021 at St. Stephen's United Methodist Church in Broken Arrow.

The family of Flora Mae Seidl created this Life Tributes page to make it easy to share your memories.

Send flowers to the Seidl family.