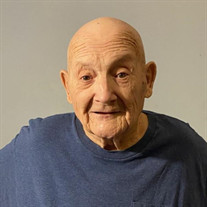 Floyd Herschell Pannell was born in Montana, Arkansas on September 11, 1928 to Charlie and Hallie Carter Pannell. He was called to his heavenly home April 9, 2021 , at the age of 92 years old. Herschell was preceded in death by his parents , his wife June, son Herschell Lee and son Mike, as well as , his siblings Raymond, Argus, David, Mary Jo, Mattie, Leon and Harmon. He is survived by his grandchildren Merit Pannell, Roger Pannell and wife Miranda, Megan and husband Charles Egan, Tiffany, Angel Smith, April Yingst and husband Calep and Tia Hutcheson. His great grandchildren Nadine, Kaytlynn , Jordyn , Troy, Sawyer, Kayleb and Evelyn. Brother Kenneth and wife Georgia. Numerous nieces and nephews as well as extended family members, Mr. and Mrs. Billy Zumwalt and Mr. and Mrs. Roy Smith. Herschell has been a mentor in Billy and Roy's lives from early on and considered them his sons. Daughter in law Elaine Pannell. Herschell married his sweetheart Norma June Lightfoot June 16, 1950. They were married 46 years until her passing in August of 1996. Herschell and June would host many fish fries over the years from the fish that him and Mike caught. The Pannell's, the Lightfoot's and friends were always invited for family dinners, every Thanksgiving and Christmas. There was always a house full. Herschell and June loved their family and friends and the fellowship from the gatherings in their home. Herschell retired from the Tulsa Fire Department in 1983 as Captain of Station No. 29 after serving the City of Tulsa for 27 years. Many lifetime friendships were made with co-workers from the Tulsa Fire Department. He also made lifetime friendships from coaching baseball many years. In June of 2016 Herschell moved to Caney Kansas to live with his granddaughter Megan, her husband Charles and his great grandchildren Kaytlynn , Kayleb and Evelyn. He loved living on the farm and watching the various animals and enjoyed fishing in the pond . He loved road trips with his granddaughter Megan, visiting family and friends no matter what state they lived in. He loved visiting and talking on the phone with anyone that would call. Megan said her Papa was the greatest and most caring man ever. Herschell and June raised her and gave her a loving home and she in return gave him one. He enjoyed boating , fishing , coaching baseball, and boxing as a young man in Arkansas. He lived his childhood in Arkansas and on his first day of school the teacher asked him when his birthday was, and he said " the day after sisters ". So the teacher had to ask Mary Jo when her birthday was. The Pannell family has laughed about that for many years. Herschell was a Christian that loved life and all it had to offer... Those that knew him loved him and those that didn't know him missed out on a friendship with a wonderful loving man. He will be greatly missed. Family is requesting plants or something that can be planted in their garden over cut flowers. They would like something to keep his memory alive. Livestream will be available to those unable to attend. It will begin at 9:45 AM at the link below. https://webcast.funeralvue.com/events/viewer/52043/hash:3BBEACED76930497

Floyd Herschell Pannell was born in Montana, Arkansas on September 11, 1928 to Charlie and Hallie Carter Pannell. He was called to his heavenly home April 9, 2021 , at the age of 92 years old. Herschell was preceded in death by his parents... View Obituary & Service Information

The family of Floyd Pannell created this Life Tributes page to make it easy to share your memories.

Floyd Herschell Pannell was born in Montana, Arkansas on September...

Send flowers to the Pannell family.