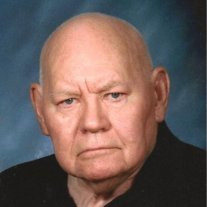 F.G. Williams of Ponca City, Oklahoma passed away May 19th, 2013. He was born Forrest G. Williams on September 8, 1931 in Grinnell, Kansas to parents, Clarence and Leatha Williams. F.G. moved to Ponca City in 1987 and from that moment referred to Oklahoma as home. Survivors include wife Martha, brother Ronald Williams and wife Linda of Valley Center, Ks, sister Sharon Blythe and husband Jerry of Hayden Lake, ID, Son Stan and wife Debra of Oxford, NC, daughter Lori Casto of Cary, NC and stepsons, Warren P. Brown and wife Jackie, Paul S. Brown and wife Tina and Brad W. Brown and wife Sindy all of Stillwater, OK. He had nine grandchildren, four great grandchildren and several nieces and nephews. He was preceded in death by his brother, Vernon of Wichita, Ks and sister, Myrna Krimmel of Warminster, PA. He was active in his church, First United Methodist Church of Ponca City, a Master Gardener, former Worshipful Master of Newkirk Masonic Lodge and long term member of the Arkansas City Masonic Lodge. He was on the first board of Camp McFadden serving as treasurer and helped organize the effort to establish the camp. He was particularly proud of his status as a veteran of the Korean Conflict as a Sergeant in the U.S. Marine Corps, honorably discharged in 1954. F.G. was a graduate of Wichita State University earning a Bachelor Degree in Business Administration in 1963. He worked forty years as an accountant at various companies, most recently as business administrator at Arkansas City Memorial Hospital and before that at the Army Ammunition plant in Parsons, KS. F.G. spent his retirement years gardening, tracing family genealogy, hunting, fishing and spending time with his grandchildren. His great-grandchildren affectionately referred to him as â??Papa Pickleâ?. An avid reader he enjoyed non-fiction books about American History, firearms and early model cars. A memorial service will be held Thursday, May 23rd, 2013 at First United Methodist Church in Ponca City at 11:00 a.m. In lieu of flowers, donations may be made to Camp McFadden, P.O. Box 1495, Ponca City, OK 74604 or the American Diabetes Association, 7000 N Western Ave, Oklahoma City, OK 73116.

F.G. Williams of Ponca City, Oklahoma passed away May 19th, 2013. He was born Forrest G. Williams on September 8, 1931 in Grinnell, Kansas to parents, Clarence and Leatha Williams. F.G. moved to Ponca City in 1987 and from that moment referred... View Obituary & Service Information

The family of Forrest Glen Williams created this Life Tributes page to make it easy to share your memories.