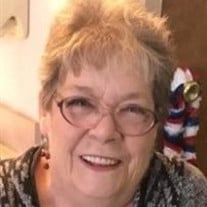 Frances Elizabeth Combs, 71, resident of Cleveland, Oklahoma passed away November 1, 2019. Frances was born November 29, 1947 in Albion, Michigan to William and Doris Allen. Frances married Joel on October 21, 1967 in Homer, MI. Frances became a widow and single mother in May of 1980. She moved to Oklahoma in 1983 so she could be closer with her parents because she was diagnosed with Multiple Sclerosis and needed help caring for her children.  After a few years of living in Oklahoma Fran decided to go to college and get her Associates degree from TJC and finished her Bachelor’s at Langston University. She later worked for Creek Nation Bingo recently known as Creek Nation Casino. She retired after over 15 years of working for them in 2010. She loved playing Bingo, going to the Casino, spending time with family, and playing cards  and other games with family. She was also an avid reader! She was a devoted wife, mother, grandmother and friend. She will be dearly missed by everyone who knew and loved her.Frances is preceded in passing by her spouse, Joel Combs; her parents, William Ades Allen Sr. and Doris Frances Allen (Aslin); her sister, Gertrude Allen; her brother, William Allen Jr.; great-grandson Breckyn and her nephew, John Dearth.She is survived by her son, John Combs and his wife, Janie; daughter, Yvette Combs; grandchildren, Amber, Macayla, Darrell, Courtney, Megan, Alisha, Joel, Skye, William, and Matthew; numerous great-grandchildren; her siblings, Carol, Debora and her husband Pilar, James and his wife Cathy, Susan and Jean and numerous nieces, nephews family members and friends.Services will be held in Michigan at a later date

The family of Frances Elizabeth Combs created this Life Tributes page to make it easy to share your memories.