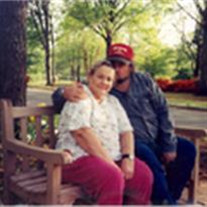 Mrs. Frankie Jean Jobe-McCarthy was resurrected on November 11, 2004 at 11:25 PM to heaven and now resides in that mansion that was prepared for her by our father there. Born Frankie Jean Lay to Lorraine Estelle Shepherd and Jewell Briscoe Lay on July 1, 1938 at 11:30 PM. Fourteen months later the couple divorced and Lorraine was granted full custody of the child, but was unable to care for her. Due to her sickness she turned over custody to the Jobe family in west Tulsa when the child was only fourteen months old. At the age of six, Mae and Leonard Jobe legally adopted the young lady, she now became Frankie Jean Jobe residing with them at 3707 S. 27th W. Ave., which had been her home for the last four years. Frankie attended Park Elementary, Clinton Middle School, and Daniel Webster High School on Tulsa’s west-side. Frankie attended Forty-First Street Christian Church with the Jobe family at every oppurtunity. She expirienced a pleasant and loving parental relationship, as the Jobe’s afforded and incomparably high level of understanding and resposibility for the care of this special child. Mae had previously lost a child during childbirth which led to her and Leonard’s display of affection for this child. The bonds formed through this relationship lasted forever and now she is home with them again, once again to perceive the peaceful and loving environment that she experienced early in her life. Her dreams of having a husband and children to afford the lifestyle that she has experienced with the Jobe family came true when she united in matrimony with Henry Earl Hayburn McCarthy. Together they had two children, Catherine and Gregory. Frankie kept the family in church,attending the Redfork Church of God, while performing all the duties correlating with her role responsibility as mother at a degree that was unmatched. As mother, she was always there to care for her children offering a level of love and compassion that was unmatched in comparison to anyone. She served as homeroom mother and leader of the ParentTeacher Association while the children were in grade school. She attended every extra curricular event throughout high school, whether it be a sporting event or a queen contest for her daughter. After the children graduated high school she became divorced and struggled to survive this demanding new lifestyle affording a high degree of independence. We were all very proud of mother as she even attended college class at the Oklahoma School of Business in an attempt to rehabilitate herself. As her health began to decline so did her hopes of acheving ther personal status that he life now required. When she was removed from our home in west Tulsa in order to afford my father financial assistance, she relocated to Hewgley Terrace with the help of the Tulsa Housing Authority. She remained there until 1998 when she moved to another THA apartment located in Inhofe Plaza on South Peoria. There she made mant new acquaintances and enjoyed the many activities afforded by the residents of this complex. There she met Mr. Jerry Boss who became her closest companion and confidante. They were never married but he assumed fatherly role to her children and cared for her with the compassion she deserved in the role of a husband. Jerry passed away last March at the age of 76 as a result of complications from advanced Alzheimers Disease. Frankie was distraught with loneliness after his passing and lost her desire to continue with life. When the progression of Alzheimers finally forced him to reside in a nursing facility, she too agreed to move there with him for companionship and help performing the activities of daily living. She remained complacent there until his death when she desired a closer relationship with her son and his family at which time she was moved to Pleasant Manor Nursing Center in Sapulpa so they could visit her each day. This same need was also sensed by the Jobes when their health decline forced them to take up residence at Sherwood Manor Nursing Center in 1980. Frankie visited them each day just as their needs reqSurvived By: her biological son Greg and his wife Darla; biological daughter Catherine and her husband Johnny Matthews, grandchildren Jeremy and Jamie McCarthy, Rebekah and Jacob Mathews, and one sister Phyllis Saulmon Bess. Frankie was preceded in death by her biological mother and father, Lorraine Saulmon and Briscoe Lay: her adoptive parents, Mae and Leonard Jobe; and her brother Bud Saulmon.

Mrs. Frankie Jean Jobe-McCarthy was resurrected on November 11, 2004 at 11:25 PM to heaven and now resides in that mansion that was prepared for her by our father there. Born Frankie Jean Lay to Lorraine Estelle Shepherd and Jewell Briscoe Lay... View Obituary & Service Information

The family of Frankie Jean Jobe-McCarthy McCarthy created this Life Tributes page to make it easy to share your memories.