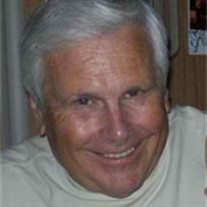 In remembrance and celebration of Freddie “Fred” Ray Teague, 78 yearâ??s young, from Owasso, OK. He was born on January 8, 1934 in Soddy, Tennessee, and went home to be with the heavenly father on August 29, 2012. He is the son of Fred and Arvazine Teague. He attended Soddy-Daisy High School where the star running back of the football team met the love of his life, Barbara “Babs” Palmer. They married and have been together 59 years. He was awarded a full football scholarship to Georgia Tech. He graduated in 1957 with a degree in engineering. He began his career at Combustion Engineering, in Chattanooga, TN. Retired after 20 years from McDonnell Douglas in Tulsa. He was a devout Christian, Baptist and Mason. He loved the outdoors hunting and fishing with family and friends. He enjoyed supporting his children and grand-children in their sports, music, and activities. Recently, he was inducted into the High School Football Hall of Fame of Soddy-Daisy, TN. He never completely retired from football; from 30 years of refereeing High School games to fantasy football with family and friends. He is now running touch downs for God. Fred Teague is preceded in death by daughter, Angela Jean Teague. He is survived by wife, Barbara “Babs” Teague of Owasso, OK, son, Freddie Michael Teague of Sand Springs, OK, daughter, Gloria Jane Mayfield, of Broken Arrow, OK, son, Daniel Ray Teague, and wife, Angie, of Owasso, OK. His legacy lives on through 6 grandsons, 5 granddaughters, 4 great grandsons, 2 great granddaughters, and 1 great grandchild on the way, sister, Barbara Morrison, of Hixson, TN, Sister, Judy Hurley, Nashville, TN. Brother, Billy Teague, of Knoxsville, TN. In Lieu of flowers, donations can be made in honor of Fred Teague to American Heart Association. Services will be held at Floral Haven Funeral Home Chapel on Saturday, September 1, 2012 at 12:30 PM. Family will receive friends Friday, August 31, 2012, from 6 to 8 P.M.

The family of Fred R. Teague created this Life Tributes page to make it easy to share your memories.

In remembrance and celebration of Freddie “Fred” Ray Teague,...