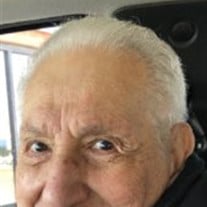 A-much-loved husband, father, grandfather, great-grandfather, son and brother, Fred Ojeda, 93, of Sand Springs Oklahoma, passed away peacefully at his home December 23, 2019 with his family at his side. He had bravely confronted Alzheimer’s and was under Hospice care at the time of his passing. He was born 11-21-1926 in San Diego California and resided in Sand Springs for the past 6 years, having moved from Sun City West Arizona to be closer to family. Fred spent his youth in San Diego, California where he enjoyed competing in wrestling and became State Champion at the high school level. Fred was in the US Navy, served on the USS Atlanta, recipient of the Victory Medal World War II, and received an Honorable Discharge.Fred spent his career in aerospace working on the X-15 and B-70 aircraft prior to his transfer to NASA’s Kennedy Space Center to work on the Apollo space missions, and at retirement was working on the Space Shuttle after 25 years in the industry. Fred lovedsailing with his family and traveled the US full time in his RV for over 10 years after retirement. He was an excellent ball room dancer and cherished every minute on the dance floor performing and instructing with his wife Mitzi. He was always active and involved in his community and served on the sun City West Sheriff Posse for over 5 years.He is survived by his wife of 65 years, Mitzi Ojeda of Sand Springs, son Rikki Ojeda and wife Kathy of Merritt Island, Florida, son Dean Ojeda and wife Doris of Sand Springs, granddaughter Melissa Johannesmeyer of Sand Springs, grandson Donovan Manship of Palmdale, great-grandchildren Brooke, Paige, Cameron, Colin, and Zach; Brother Louie Ojeda of San Diego. He was preceded in death by his father Louis M. Ojeda, Mother Josephine Gonzalez, Sisters Cherry Silva, and Josephine Molina, and Grandson Dean Manship.A private funeral service will be held at the time of cremation to honor Fred’s request.

A-much-loved husband, father, grandfather, great-grandfather, son and brother, Fred Ojeda, 93, of Sand Springs Oklahoma, passed away peacefully at his home December 23, 2019 with his family at his side. He had bravely confronted Alzheimer&#8217;s... View Obituary & Service Information

The family of Fredrick Ojeda created this Life Tributes page to make it easy to share your memories.