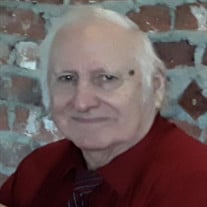 Rev. Garey Stephen Cline , 74 of Tulsa, Oklahoma passed from this life on Friday, August 28, 2020 at St. John's Hospital in Tulsa, Oklahoma. He was born on May 3, 1946 in Hugo, Oklahoma to Rufus M. Cline and Rachel R. (Linkswiller) Cline. He is survived by his loving wife, Wilma Cline of the home; two children, daughter, Renee Brown and husband BJ of Broken Arrow and son, Clifton Cline of Broken Arrow; one step daughter, Sarah Wallace, of Houston, Texas; two siblings, Ellen "Mutt" Helton of McKinney, Texas, Al Cline and wife Mary of San Jacinto, California; six grandchildren; Hunter Brown, Xander Brown, Hayley Rose Brown, Gracie Wallace, Alaina Wallace and Jaimee Wallace, several nieces, friends and extended family members. Garey was preceded in death by his grandparents, Jerome and Syntha Linkswiller; parents, Rufus & Rachel Cline, brother, Ray Cline and brother in law, Loyyd Helton. He was raised by his mother, Rachel, who taught him to read at an early age out of the family Bible. By the age of three he could read and even spell "Nebuchadnezzar" forwards and backwards. Garey was an avid reader and had a photographic memory. By the time he graduated high school, he had read every book in the school library that he could. Garey also loved to sing in church, beginning at age 5 when Sis Pieceachubby offered him a fifty cent piece if he would sing "Keys To The Kingdom" in church. He did and never stopped and he still had The Keys to The Kingdom when he passed. Garey loved baseball, particularly the St. Louis Cardinals, and knew every statistic for every player of almost every team since he was 9 yrs old. He was also an avid OU Sooner football fan, he spent every Saturday during football season texting and calling Renee back and forth to say "Boomer Sooner" or "It's time for a word of prayer". Garey was a master butcher, a bread route salesman, pastor and greeter at Home Depot throughout his professional career. When balancing his accounts for his bread route, or personal accounts, he never used a calculator because he could do the figuring in his head faster and more accurately. He was a master story teller and he had a story for EVERY situation that ever happened. He was a friend to all that would let him and truly had a pastor's loving heart. He would always say "Hell's hot, Heaven is sweet and Jesus saves!" Garey married Cathy Craig in August of 1971 in Spiro, Oklahoma. They welcomed a daughter, Dawn Renee, eight week early in November of 1972 and a Son (the only boy on both sides), Clifton Stephen, in June of 1976, on his Grandmother Rachel's 69th birthday. Garey Pastored Assembly of God Churches in Marion & Elkton, Kentucky, Blanchard & Liberty, Oklahoma and Croker, Missouri, and Broken Arrow Full Gospel Chapel in Broken Arrow, Oklahoma. In Missouri, his best friend for 55 plus years, Rev Joe Pierce also pastored in a neighboring town. Joe and Garey were as close as any brothers and were there for each other in all of their lives ups and downs. On May 27, 2016 Garey married Wilma Ridell. They shared 14 years together and enjoyed spending time with their Grandchildren and traveling together all over the country from Kentucky, Iowa, Missouri and Claifornia. A few years ago, Garey reconnected with a childhood schoolmate, Merle Jacobs. Merle became Garey's "right hand man" and was a constant help for Garey and Wilma the last few years. Garey Cline led a life of Christian Faith and left that legacy to his family, as did his Grandfather Linskwiller before him. He was loved by those who knew him and will be greatly missed. A celebration of life memorial service will be held at 3 p.m. on Friday, September 25, 2020 in the Chapel of Floral Haven Funeral Home. ***Services will be live streamed starting at 2:45 p.m. on 9/25/2020. To view the service live, please click on the following link: http://webcast.funeralvue.com/events/viewer/36121 ***Masks are required if you plan to attend the service in person. In lieu of flowers, please make a memorial in Rev. Cline's name to the Broken Arrow Full Gospel Chapel, 520 N 9th St, Broken Arrow, OK 74012.

Rev. Garey Stephen Cline , 74 of Tulsa, Oklahoma passed from this life on Friday, August 28, 2020 at St. John's Hospital in Tulsa, Oklahoma. He was born on May 3, 1946 in Hugo, Oklahoma to Rufus M. Cline and Rachel R. (Linkswiller) Cline. He... View Obituary & Service Information

The family of Rev. Garey S. Cline created this Life Tributes page to make it easy to share your memories.

Send flowers to the Cline family.