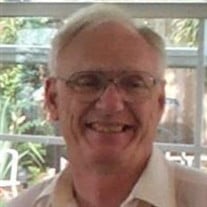 Gary Gar Lewis passed away on September 4th, 2021 at the age of 79, in Tulsa, Oklahoma. He was an adoring husband to the love of his life, Ruth, for 59 years. Gary was a devoted father to his son Jeff and daughter Tammy, a trailblazing, adventurous grandfather to Mandie, Ashley, Travis, and Jordin, and a grateful, dependable great grandfather to Larissa, Chloe, Angelina, Jace, Orion, Julianna, Osiris, and Cora. Gary is preceded in death by his father Gar, mother Evelyn, brothers Lee and Ken, and his beloved pets Phil, Fozzy, and Angel. A retired structural mechanic, he became a jack-of-all-trades (or rather, a serial hobbyist) he enjoyed working with his hands for as long as he was able to. Some other activities he was fond of were painting in various mediums, model airplanes, stained glass art, playing solitaire, collecting printers, and reminiscing as a ‘semi-retired truck driver’. Gary enjoyed traveling, especially when it involved driving across the country with his wife Ruth. His lively enthusiasm and affinity for capturing smiles traveled with them, state line after state line. He never balked when it came to being there for his family when they needed him, no matter what lengths it took to be there. If there was a problem— Gary was there to fix it, whether you needed him to or not. His love was apparent in his actions, he strived to make anyone and everyone’s day better in whatever way he could. Loved and revered by all who met him, a love like that which burst at every seam, it is no wonder his love outgrew his earthly body as he was called from heaven to come home. His viewing will be open to the public from 4-6 pm on Tuesday, September 7th and his funeral service will be Wednesday, September 8th at 12:30 pm at Floral Haven Funeral Home 6500 S 129th E Ave, Broken Arrow, OK 74012 If you cannot attend the service in person webcasting is available at the following link: https://webcast.funeralvue.com/events/viewer/59891/hash:059DB40546A77ED4

Gary Gar Lewis passed away on September 4th, 2021 at the age of 79, in Tulsa, Oklahoma. He was an adoring husband to the love of his life, Ruth, for 59 years. Gary was a devoted father to his son Jeff and daughter Tammy, a trailblazing,... View Obituary & Service Information

The family of Gary G. Lewis created this Life Tributes page to make it easy to share your memories.

Send flowers to the Lewis family.