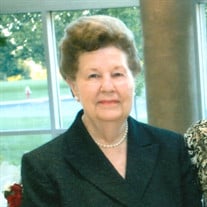 Gena Jones Gwartney was born on January 10, 1925 in Palmer, OK. She was the youngest of four children of Forbes Marcus Jones and Forrest Lantz Jones. She graduated in 1942 from Hickory High School where she was valedictorian of her class. Gena moved to Tulsa upon her graduation and lived with her older sister, Oleta Silvers, and her family. She attended business school and began work at McDonell Douglas where she would meet her future husband, Warren Gwartney. Gena continued to work during their early years of marriage in Oklahoma City, working for a local attorney, while Warren attended OU Medical School in Oklahoma City. In 1950, they returned to Tulsa as Warren completed his internship at Hillcrest Hospital. In 1951, the family moved to Pryor, Oklahoma where Warren started his medical practice and Gena became a homemaker and Mother. Their daughter, Barbara, was born that year and their son, Joe, was born the following year. The Gwartneys moved to Tulsa in 1962 where Warren built his practice and Gena provided a stable home for the family. Warren was one of the original founders of Doctor’s Hospital in 1966. When the hospital was sold in 1983, the Doctors used the proceeds to establish the charitable foundation, Founders of Doctor’s Hospital. Warren and Gena would serve on the Board of Trustees for the Foundation from 1983 until his death; Gena would continue to serve, in several capacities including President, until 2007. Gena was also active in the Tulsa Medical Society for many years. Gena and Warren loved to travel; they would visit 5 continents, take 14 cruises and make frequent trips to Las Vegas as they grew older. Gena enjoyed bowling in a league for 55 years, playing cards with her friends, and reading. Gena was preceded in death by her parents, her husband, Warren G. Gwartney, her son, Joe Warren Gwartney and her three siblings, Oleta Silvers, Pete Jones and Benjamin Jones. She is survived by her daughter, Barbara West and her husband, Barry, of Tulsa; three grandchildren, Marc Warren Schmidt (Julie) of Dallas, TX, Gena Schmidt Anderson (Jeffrey) of Arlington, TX, and Kylee Gwartney Worsham (Tyler) of Mustang, OK as well four great-granddaughters, Sydney and Laney Schmidt and Julia and Georgia Anderson. Also surviving Gena are several nieces and nephews. The family would like to express their gratitude to the staff at Oklahoma Methodist Manor’s Priddy Harbor for their love and care for “GG” during her six year stay. There will be a private graveside service for the family. Memorial contributions can be made to the Alzheimer’s Association at 2448 E. 81st Street, #3000, Tulsa, OK, 74137 or the Oklahoma Medical Research Foundation, 825 N.E. 13th Street, Oklahoma City, OK, 73104.

Gena Jones Gwartney was born on January 10, 1925 in Palmer, OK. She was the youngest of four children of Forbes Marcus Jones and Forrest Lantz Jones. She graduated in 1942 from Hickory High School where she was valedictorian of her class. Gena... View Obituary & Service Information

The family of Gena Jones Gwartney created this Life Tributes page to make it easy to share your memories.

Send flowers to the Gwartney family.