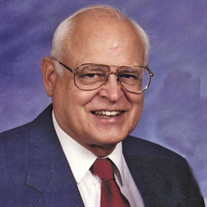 George was born in Flushing, New York, to George Emmett Campbell, Sr. and Edna Frances Eason Campbell. He lived in Long Island, New York, and attended New York schools. George graduated from high school in Tokyo, Japan, in 1949. He earned a degree in industrial engineering from The University of Florida in 1954. He was in the ROTC at The University of Florida and on July 4, 1954, he was called to active duty in the United States Army, as an officer, completing Ranger and Airborne training. He then served in the U.S. Army as a 2nd and 1st Lieutenant in the 11th Airborne Division, and was honorably discharged and graduated with a Master’s Degree in industrial engineering in 1964. He worked as an engineer for 10 years. In 1970, he chose to become a minister of Jesus Christ and he earned a Master of Divinity degree in 1973 from Columbia Theological Seminary. Rev. Campbell was an active Presbyterian minister for 23 years but even after he formally retired, he continued to serve churches until 2010. George loved sports. He played basketball, baseball and football in high school. Later, he played basketball and softball in city leagues. He was a swimmer, and threw Shot put and discus in the National Senior Games twice; once in St. Louis, Missouri, and once in Syracuse, New York. George married Martha Jeanne Tull on September 4, 1954. They lived in Germany while he was in the Army and they served the Lord in several states during their 67-year marriage. George leaves his wife, Martha; son George (wife Beverly); son John; and daughter Susan Biggs (husband Charles); four grandchildren: Danielle Campbell (husband Peter); Brian Biggs (wife Shelby); Josiah Biggs (wife Kaili); Sarah Berg (husband Josh); and two great-grandchildren: Reyma and Atticus Berg. George loved God, he loved his family, he loved his country and he loved serving and helping others. Funeral services will be held at 3pm on Friday, October 15, 2021 at Floral Haven Chapel. Visitation will be held one hour beforehand. For those that cannot attend in person webcasting is available at the following link: https://webcast.funeralvue.com/events/viewer/62218/hash:591B4A9C6F6A0C9D

The family of George Emmett Campbell created this Life Tributes page to make it easy to share your memories.

Send flowers to the Campbell family.