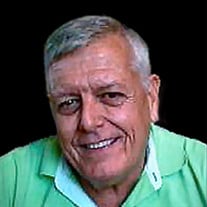 George Robert Hawkins, 71, of Tulsa, Oklahoma passed from this life on Monday, January 24, 2022. He was born on February 6, 1950, in Tulsa, Oklahoma to his parents, Charles Quantrell Hawkins and Irma Ruth Orten Hawkins Alexander. On December 20, 1969, George married his love, Sandra Kay Ray. Over the next 52 years, they shared their lives together and raised a family. George is survived by his loving wife, Sandra Hawkins of Tulsa, Oklahoma; three children, Christy Ritchie and her husband David of Tulsa, Oklahoma, George R. Hawkins, Jr. of Dallas, Texas and Jennifer Hawkins of Tulsa, Oklahoma; three siblings, Linda DeVoe and her husband Jim of Grove, Oklahoma, Bill Alexander of Tulsa, Oklahoma, and Melissa Jack and her husband John of Tulsa, Oklahoma; five grandchildren, Lindee Buff, Landon Buff, Mia Sisk, Trip Ritchie, and Conner Ritchie; as well as many extended family and friends. He was preceded in death by his parents and one brother, Mike Hawkins. George served for 22 years in the United States Marine Corps and retired as a Master Sergeant. He was part of the legendary Mike Company, 3rd Battalion, 7th Marine Regiment, which was deployed to Vietnam from Camp Pendleton from 1968 to 1969. He received the Purple Heart after being wounded in action. While serving in the military, he was stationed at Fuji, Japan; Adak, Alaska; Kaneohe, Hawaii; and many others across the continental United States. Some of his many accomplishments included: Guard for the Marine Barracks, Washington, D.C., also known as "8th & I," and is the oldest active post in the United States Marine Corps. He served as pallbearer for Lyndon B. Johnson, the 36th President of the United States, J. Edgar Hoover, who served as the first Director of the Federal Bureau of Investigation, and Lewis Burwell "Chesty" Puller, who served in the United States Marine Corps as Lieutenant General and was the most decorated Marine in American history. He had countless metals and ribbons from his long military career. He was a family man, a patient father, and a role model, who would relentlessly spoil his grandchildren. George wielded an arsenal of endless dad jokes that always lifted hearts and brought smiles. He was an avid golfer, fierce competitor, a coach, and always a listener. George’s honor, love, and loyalty for his family, his country, and friends were unbreakable. Fair winds and following seas, you are relieved of duty, Rest In Peace, Marine… Semper Fi! Services will be private.

George Robert Hawkins, 71, of Tulsa, Oklahoma passed from this life on Monday, January 24, 2022. He was born on February 6, 1950, in Tulsa, Oklahoma to his parents, Charles Quantrell Hawkins and Irma Ruth Orten Hawkins Alexander. On December... View Obituary & Service Information

The family of George R. Hawkins created this Life Tributes page to make it easy to share your memories.

George Robert Hawkins, 71, of Tulsa, Oklahoma passed from this...

Send flowers to the Hawkins family.