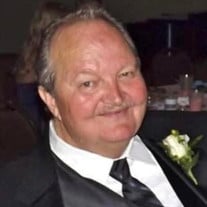 George "Skip" Odeal Long Jr., 76, resident of Tulsa, Oklahoma, passed away peacefully and so ready to meet his Lord, Jesus Christ on January 7, 2022. Skip was born December 11, 1945, in Plymouth, Indiana to George and Mary Long. He graduated from Plymouth High School in 1963. He joined the Air Force in 1964 & served until 1967. He served 3 terms in Vietnam and was stationed at Davis Montham Air Force Base in Tuscon Arizona. On December 30, 1967, he was united in marriage to Julie Ann Brekke in Downey, California. They remained in Tuscon until his discharge in 1967. George (Skip) and Julie lived in many places in their 54 years of marriage. They lived in Arizona, Texas, Louisiana, South Dakota, and Oklahoma. In 1970 Skip discovered a natural ability and love for baking and for many years they owned several bakeries as well as being the area manager for a large grocery store chain in Texas. He was so good at baking and blessed that it provided security and provided employment everywhere they lived. In 1979 they moved to Watertown, South Dakota to be closer to their family and to enjoy the snow. In April of 1983 Skip fell 15ft down a pitch-black elevator shaft. He went through intense therapy and then the doors opened for Skip to go to Oral Roberts University in Tulsa, Oklahoma. He received his master's degree in Pastoral Counseling & held a LPC license and spent the next 30 years counseling & ministering to people young and old, pouring his love & care into their lives. It was the joy of his life. He retired in 2015, he was a disabled veteran. He was so grateful for his time serving in the Air Force and in Vietnam. He was a proud United States Air Force Veteran. Skip was preceded in passing by his parents, George Odeal Long and Mary Long (Silveus) and his sisters, Georgia Lee and Mary Delann. Skip is survived by his beloved wife, Julie Long; daughter, Delann Griego and her husband, Nick; son, Cameron Long and his wife, DeWana; son, Jason Long and his wife, Darlene; daughter, Tessa Allen and her husband, Rusty; his grandchildren, Gabriel Dao, Kaylee Dao and her fiance, Oscar Rodriguez, Sarah Dao, Beau Griego, Eddie Griego, Riley Griego, Allyson Long, Andrew Long, Tate Allen and Reid Allen; his sister, Jarda Long; sister, Eldonna Overson and her husband, Lonnie; sister, Regina Fett, and numerous other family members and friends. Celebration of Life Service will be 12:30 pm, Friday, January 21, 2022, at Floral Haven Funeral Home Chapel. To view the services via webcasting use the link below: http://webcast.funeralvue.com/events/viewer/67024/hash:6520FF360DFAC37B

The family of George "Skip" Odeal Long Jr. created this Life Tributes page to make it easy to share your memories.