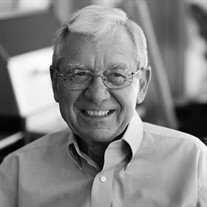 George Robert ‘Bob ’Taylor passed peacefully from this earth on June 7, 2021. He was preceded in death by his wife Pauline Riggin Taylor, daughter Lynne D’Eredita, and granddaughter Leslie Anne Armour. Bob was the first baby born on New Years Day 1932 in Spartenburg, South Carolina. His parents were Mary Lou Johnson Taylor and George Morris Taylor, sisters were Betty and Ann. His formative years were spent in Florida where he developed an interest and talent for remote-controlled aircraft, winning multiple awards in competitions, and igniting a lifelong passion for aviation. It was also in Florida where he met and became good friends with Gene Riggin, who made the introduction to his sister, Pauline. Bob and Pauline went on to marry and spent 59 adventurous years together, traveling the world courtesy of the US Air Force. They had four daughters, Vicki (Gary) Lane, Julianne (Bobby) Armour, Lynne (Rick) D’Eredita and Katy (Chris) Ford, eight grandchildren, Antoinette, Trip, Leslie, David, Adam, Michael, Bryan, and Cooper, and nine great-grandchildren, Bryce, Austin, Avery, Taylor, Keegan, Bennett, Nolyn, Benji and Margaret. Bob joined the Air Force in 1952, went to pilot training, and graduated from Oklahoma State University with a degree in Architectural Engineering in 1962. He later obtained a master's degree in International Relations from Boston University. He had a successful 32 years of service in the Air Force, flying F-4s, becoming an instructor pilot, base commander, and base civil engineer achieving the rank of Colonel. He was a member of the Red River Valley Fighter Pilots Association and the Order of Daedalians. Post military service, Bob worked for Northrup Grumman as the base civil engineer at Vance Air Force Base in Enid Oklahoma. After many years of relocating, Bob and Pauline made Tulsa their retirement home. They enjoyed making new friends, while hosting family and dear friends from their AF days, often on their boat at Lake Keystone. Annual week-long family reunions at the lake were a highlight for the kids and grandkids. Bob treasured his family and friends, he always found a way to lighten the mood with a joke, story, or funny observation. The family will miss his wit, devotion and generosity that made him a wonderful husband, brother, father, grandfather and friend. A Memorial Service will be held at 11:00 am on July 3, 2021, at Floral Haven Rose Chapel, Broken Arrow, Oklahoma. For those who wish to make a donation in Bob’s memory, the family suggests the Cystic Fibrosis Foundation, Sooner Chapter, 2123 S Atlanta Pl, Ste 100 Tulsa OK 74114. If you are unable to attend the service in person we will be webcasting the service at the following link: https://webcast.funeralvue.com/events/viewer/56343/hash:31331EEB16FD0A19

The family of George "Bob" Taylor created this Life Tributes page to make it easy to share your memories.

Send flowers to the Taylor family.