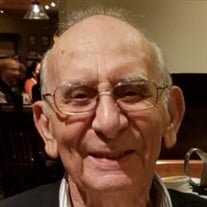 George Thiesen Wedel Jr., 94, resident of Tulsa, Oklahoma, passed away on January 10, 2022. George was born November 21, 1927, in Collinsville, Oklahoma to George and Katherine Wedel. He will be missed by everyone who knew and loved him. George... View Obituary & Service Information

The family of George Thiesen Wedel Jr. created this Life Tributes page to make it easy to share your memories.

Send flowers to the Wedel family.