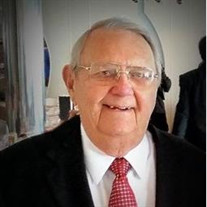 Gerald (Jerry) Glen Nixon passed away on February 7, 2020, at 3:08 AM, at the Glenwood Skilled Nursing and Rehabilitation facility in Glenpool, OK. Born August 2, 1932, to Glen and Tella (Graves) Nixon in Ft. Cobb, OK. He played varsity football for Cimarron High School in Cimarron, KS, and graduated from Cimarron High School in May, 1950. He met his wife, Jane Ardis Mountain at Ft. Hays State College, standing in line at the bookstore during their freshman year. Jerry served in the Air Force during the Korean War and he married Jane on May 17, 1953, while he was in the service. Upon his discharge, both returned to school to finish their education. Jerry graduated from Kansas State University in 1959 with a B.S. in Mechanical Engineering. He was a design engineering executive specializing in off-highway mining trucks, with a career that took him around the world several times. His career began with Westinghouse, and then quickly moved to designing mining trucks for KW Dart in Kansas City, MO. After leaving KW Dart, Jerry joined Kearney State College in Kearney, NE, to manage the physical plant. In addition, he is also credited for the design and construction of the school’s Fine Arts Center. From Kearney, Jerry joined Allis-Chalmers in Topeka, KS, focusing on the design and production of construction equipment. Jerry’s engineering career culminated as the Director of Engineering with Unit Rig & Equipment in Tulsa, OK. Finally, he founded a leading-edge document scanning and conversion firm, retiring at last in 2006. Jerry was a long-time Tulsa resident, moving here in March of 1976. He was an active member of First Presbyterian Church, serving as a Deacon, a member of the Bible Walk Sunday School class, a Stephen Minister and a Stephen Leader for many years. He also attended Bible Study Fellowship for nine years. Regardless of the situation or challenge, Jerry was known for his amazingly positive outlook on life. He was a devoted husband, father, and grandfather, who coached Little League teams, led Boy Scout troops, and was always there for his family. Jerry was an avid sports fan, especially football, golf, and car racing. In addition to watching sports, he loved to play golf, water ski, snow ski, sail, hunt, and fish. His generous spirit and quick wit will be deeply missed. Jerry was preceded in death by: his wife, Jane Ardis Nixon; his parents, Glen and Tella (Graves) Nixon; a sister-in-law, Janis Ruth (Mountain) Hoffman; and a brother-in-law, Dr. Harland Hoffman. He is survived by his son Mark Douglas and wife Deborah of Clearwater Beach, FL; son James Gregory and wife Angela of Tulsa, OK; four grandchildren – Joshua, Kathryn, Abigail and Reagan; brother Paul Eldon of Parker, CO; and Harold (Eli) of Boulder, CO. He is also survived by a host of nieces and nephews, as well as, several great nieces and great nephews. A Celebration of Life service will be held at First Presbyterian Church at 2:00 PM, with Dr. James Miller presiding. A reception will follow. The family has established a fund in his honor, and contributions should sent to: Floral Haven Funeral Home, in care of First Presbyterian Church - Tulsa, 709 S Boston Ave, Tulsa OK 74119.

Gerald (Jerry) Glen Nixon passed away on February 7, 2020, at 3:08 AM, at the Glenwood Skilled Nursing and Rehabilitation facility in Glenpool, OK. Born August 2, 1932, to Glen and Tella (Graves) Nixon in Ft. Cobb, OK. He played varsity... View Obituary & Service Information

The family of Gerald Glen Nixon created this Life Tributes page to make it easy to share your memories.

Send flowers to the Nixon family.