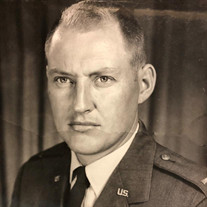 Colonel Gilmore Morris Dahl (USAF Retired) was born on March 10, 1935 in Horton, KS to Carl S. Dahl and Magdalena (Torkelson) Dahl. He graduated from Kansas State University in 1957 with a BS and with a MS in Animal Husbandry in 1959. The USAF commissioned him as a 2Lt in January 1958 upon completion of the AFROTC program. He was a member of Farm House Fraternity and president of the 1957 KSU Senior class. He married Janice Lee Albers on August 24, 1958 and they have three children, 13 grandchildren and six great grandchildren. Faithful to the end, and in the loving care of his family, Gil went to be with the Lord on June 2, 2021. He is survived by his wife of 62 plus years, Janice. Gil is also survived by their children: Son, Col Arden B. Dahl (USAF Retired) and his wife Marcia of Newport News, VA, and their children: Rachel, Karin (Scott Silver), Capt Eric Dahl, Steven Dahl (Erika), Pamela (Peter Morriss), 2Lt Christen Dahl, and Hannah; Son, Leslie B. Dahl and his wife Roxane of Liberty Hill, TX, and their children Nathan, Bethany (Josh Rooke), Rebekah (Kevin Stacy) and Michael. Daughter Catherine E. Dahl Hendrix of Tulsa and her children Blake (Alissa) and Alexandria (Jake Guy). Great grandchildren are Dominic and Esperanza Silver; Matthew and Georgia Dahl; Hannah Stacy; and Bennett Hendrix. He is also survived by his brother Richard (Sue) of Everest, KS; His brother-in-law and sister-in-law Max and Marilyn Oltjen of Hiawatha, KS; sister-in-law Kathy Albers of Bendena, KS; and numerous nieces and nephews. Gil's career as an Air Force officer took Janice and their family all over the world. As a USAF pilot, he flew multiple aircraft types, logged over 6400 flying hours, commanded the 920th Air Refueling Squadron (KC-135A), and executed over 200 combat missions in the F-4D in Southeast Asia. He retired in 1989 after 30 years of service to his country as the 90th Combat Support Group Commander. He then continued his service by working the B-2 program for Northrop Grumman until 1997. Possessing a servant's heart, he served as president of Good Shepherd Lutheran Church, Tampa, FL, and Emanuel Lutheran Church, La Habra, CA. He also served as either financial secretary or treasurer for many Lutheran churches as he and the family moved around the country. He and Janice finally settled in Broken Arrow, OK, in 1997 to be close to family. They joined Fellowship Lutheran Church that same year where he faithfully excelled at many tasks and especially grooming the church grounds. He was active in the Forest Ridge Community where he enjoyed rescuing tens of thousands of lost golf balls for the sake of local high school golf teams. He particularly enjoyed the many blessings of his grandchildren and great grandchildren. A Memorial Service will be held Sunday, June 13th at 1:30pm at Fellowship Lutheran Church, 6727 S. Sheridan Road, Tulsa, OK 74133. In lieu of flowers, kindly send donations in his name to the Fellowship Lutheran Church Endowment Fund or the Altar Guild Paraments Fund. Dad is flying high amongst the Angels!!

Colonel Gilmore Morris Dahl (USAF Retired) was born on March 10, 1935 in Horton, KS to Carl S. Dahl and Magdalena (Torkelson) Dahl. He graduated from Kansas State University in 1957 with a BS and with a MS in Animal Husbandry in 1959. The USAF... View Obituary & Service Information

The family of Gilmore Dahl created this Life Tributes page to make it easy to share your memories.

Send flowers to the Dahl family.