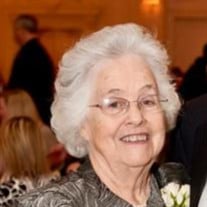 Gladys Trombley was born on April 6, 1929 in North Westminster, Vermont, the daughter of Herbert and Louise (Deslex) Allen. Gladys Trombley was promoted to heaven on Wednesday, October 21, 2020, at her home, in Broken Arrow, Oklahoma. She was 91 years of age. Gladys married the love of her life, Charles Trombley, on January 27, 1951. Together they had four children. Charles and Gladys began serving the Lord, Jesus Christ, soon after the miraculous healing of their oldest daughter in 1954. In 1956, they built and pastored their first church in Bellows Falls, Vermont. They also pastored churches in Iowa, Florida and Oklahoma. Gladys was a member of the World Ministry Fellowship, until her death. Gladys worked side by side with her husband, for many years, to build a worldwide ministry. Together they founded Charles Trombley Ministries in 1972. In 1994, they opened an orphanage, in Malawi, Africa. In 1996, two years later, land was leased and the current Victory Christian Children’s Home was established. Hundreds of children and surrounding villages have been impacted by the orphanage, school and church. The staff and children of Victory Christian Children’s Home honored Gladys with the title “Gogo Gladys” which means revered grandparent. One of the children from Victory Christian Children’s Home wrote this about her passing: Gogo Gladys Trombley passed on to heaven. She was such a woman with a beautiful soul and love for the Malawian orphaned children. We will greatly miss her while believing to meet one day in God’s Kingdom. One of her grandsons wrote: Grandma Trombley was a special lady. Quite the spitfire who sticks to her guns and leads by example. She spent most of her life storing up treasures in heaven and dedicated most of her time caring for the village of sweet children, on the other side of the world. I’ve never seen someone angry with God, for not taking her sooner, after Grandpa died, but she got her money’s worth and left peacefully in her sleep. You’ve inspired us all to leave a lasting legacy while we’re here on earth. One of her granddaughters wrote: Wife, Mother, Grandmother, Great Grandmother, Sister, Aunt, Pastor’s wife, Godly woman, Obedient, Great Faith, Grace, Elegance, and Wisdom. These are all words I would use to describe my Grandma. To me, she was my Hero, the one person in life that was my constant, never wavered in her faith or her actions. Even when life was completely chaotic and we could not see our way – she would always remind me that God is faithful. He knows what’s going on and He has a plan. Stay obedient and continue to trust Him. It has been said that the greatest use of life is to spend it for something that will outlast it. The greatest legacy you have passed on is a legacy of character and faith to all your children, grandchildren and great grandchildren. We can only imagine the reunion you had in Heaven. Well done, good and faithful servant. We love you Grandma. Gladys Trombley is survived by: Children: David Trombley, Darlene (John) West, Deborah (Larry) Metcalf and Deanna (Philip) Hughes Grandchildren: Ashley Trombley, Kendall (Nathan) Ellsworth, Christi (Denny) Phillipo, Greg (Robyn) West, John Paul (Jessica) West, Bradley (Emily) West, Brian (Donna) Metcalf, Jason Metcalf, Heather (Justin) Dehnert 16 Great Grandchildren: Brooks, Carson, Owen, Ian, Barron, Esther, Ellie, Preston, Gabe, Elizabeth, Graiden, Landon, Tanner, Brooke, Luke and Chord Brother and Sisters: Russell Allen, Beatrice Allen, Daisy French Preceded in death by: Husband: Charles C Trombley Parents: Hubert and Louise (Deslex) Allen Brothers and Sisters: William Allen, Raymond Allen, John Allen, Frank Allen, Walter Allen, Margaret Difredo, Daughter-in-law: Lisa Trombley Great grand-daughter: Allison Grace West A service will be held at 1 p.m. on Monday, November 9, at Floral Haven Memorial Gardens, Broken Arrow, OK, under the covered pavilion, in the Garden of the Last Supper. Those who wish to make a donation, in her honor, may make a Memorial Contribution to Charles Trombley Ministries, PO Box 140207, Broken Arrow, OK 74014 or online at: VictoryChristianChildrensHome.org. The fund will be used for the benefit of the children at Victory Christian Children's Home in Malawi, Africa.

Gladys Trombley was born on April 6, 1929 in North Westminster, Vermont, the daughter of Herbert and Louise (Deslex) Allen. Gladys Trombley was promoted to heaven on Wednesday, October 21, 2020, at her home, in Broken Arrow, Oklahoma. She was... View Obituary & Service Information

The family of Gladys Trombley created this Life Tributes page to make it easy to share your memories.

Send flowers to the Trombley family.