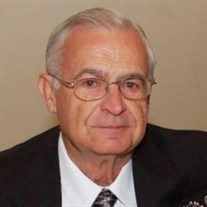 Glen Dale Kindley, 79 of Keller, Texas (formerly of Broken Arrow, Oklahoma), passed from this life on Saturday, October 24, 2020 at his home in Keller, Texas with family by his side. He was born January 12, 1941 in Broken Arrow, Oklahoma to his parents, Dwight Albert Kindley and Nora Gertrude Williams Kindley. Glen moved with his parents to Beaver Dam, Kentucky at 5 years of age, where his father worked in a coal mine. Glen graduated from Ohio County High School and Western Kentucky University with a BS in Chemistry. In 1963, Glen and his young family moved back to his family roots in Broken Arrow, Oklahoma. They attended First Assembly of God church. Most of Glen’s career was spent as an aerospace engineer, a topic that fascinated him. Certainly his main focus was family first, and he always enjoyed spending time with children and grandchildren. Other interests were golf and Texas Rangers Baseball, the focus of every evening during the MLB season. He liked jokes and was a bit of a prankster in his earlier years. Family and close friends remember his kind and gentle manner, and his generous nature. Glen is survived by Margaret Kindley of The Villages, Florida; four children, Sherri Kindley of The Villages, Florida, Michael Kindley of Grand Prairie, Texas, Jackie Wright of Keller, Texas and Linda Hash of Peoria, Arizona; one sister, Karen Daniel and her husband Gene; eight grandchildren, Laura Barrett, Katie Dieterich, Jennifer Hawk, Skylyr O'Connor, Karli Kindley, Mikala Kindley, Zach Cook and Nick Cook; five great-grandchildren, Olivia, Titus, Briley, Everlee and Delaney; and many friends and extended family members. He was preceded in death by his parents, Dwight and Nora Kindley. There are not scheduled services at this time.

The family of Glen Dale Kindley created this Life Tributes page to make it easy to share your memories.

Send flowers to the Kindley family.