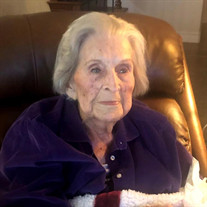 Glenna Florene Coleman Kuykendall March 4, 1925 to February 26, 2021 A native of Oklahoma and a member of the Choctaw Nation of Oklahoma, Glenna Florene Coleman was born on March 4, 1925, in Stigler. She was the daughter of the late William Coleman and Lucille Chambers Coleman. Glenna grew up in Wewoka and Pauls Valley then attended Central State College in Edmond, where she received a certificate in teaching, and later taught math for several years. While there, she met James Elton Kuykendall and they married July 24, 1947. Glenna and James lived a happy and full life together with their three children. James and Glenna celebrated their 50th anniversary before James’ death in 1997. Later in life, she became affectionately known as "Grammy" to not only her grandchildren and great-grandchildren, but to the many friends of the family who she welcomed into her home on a regular basis. In addition to her work as bookkeeper for the family business, Glenna always had a love and skill for gardening; creating beautiful outdoor spaces for everyone to enjoy. She was also a gifted artist, known famously for her ceramics painting, particularly of Santas and Nativity Scenes to decorate her home for Christmas, a holiday she loved so much. She cherished her artistic friendships at Henthorne Park Center and Fellowship Lutheran Church for many years. Glenna was also known for her faith, kindness, and hospitality. Family,friends, and visitors were always greeted with hearty meals, like her specialties of chicken fried steak and peach cobbler, and (often overly) generous portions - as she was affectionately known as a "food-pusher." Glenna is survived by her son Jonathan Kuykendall and daughter-in-law Julie of the Tulsa home, and son Michael Kuykendall. Five grandchildren: Michele Hardin and husband Wayne of Bakersfield, CA; Tracy McCoy of Beggs, OK; Jon Kuykendall and wife Sara of Cushing, OK; James Kuykendall of Washington, DC; and Jessie Kuykendall of Washington, DC. Nine great-grandchildren: Cody Hardin, Taylor Lorenz, Spencer Hardin, Logan Hardin, Landon Kuykendall, Macey McCoy, Peyton Kuykendall, Colton McCoy, and Vivianna Kuykendall. Her brother, Don Coleman, and daughter, Cynthia Hill, preceded her in death. The family asks that In lieu of flowers, you kindly consider making a donation to one of the following of Glenna’s many favorite causes: Peyton's Warriors Autism Registry: Checks may be made payable to the Cushing Police Department , and mailed to 211 E. Main St. Cushing, OK 74023 - Please list "Autism Registry" in the memo. John 3:16 Mission: 506 N. Cheyenne Ave. Tulsa, OK 74103 | (918) 587-1186

The family of Glenna Florene Coleman Kuykendall created this Life Tributes page to make it easy to share your memories.

Send flowers to the Kuykendall family.