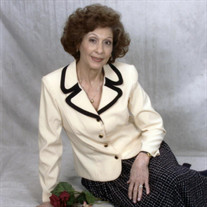 Gloria Loretta (Davy) Sellers was called home by her Lord and Savior on Sunday, May 3, 2020 at the age of 86 years. She was born February 16, 1934 on the Indian Reservation in Anadarko, Caddo County, Oklahoma to Charles Frank and Patsy Nellie (Taylor) Davy. During the Great Depression, the Davy family struggled to make ends meet before deciding to travel to California where Gloria’s uncles had moved. They got as far as Albuquerque, New Mexico before the family ran out of money. For a few years Gloria lived with her older sister, Fern, and her parents in Albuquerque before her parents divorced. When she was 12 years old, Gloria moved to Argonia, Kansas with her father and sister. The two young girls were put in charge of the kitchen and cooking meals for the small family of three. This is when Gloria perfected her cooking skills for which she later became known as an excellent cook. Gloria graduated from Argonia High School in 1951. After High School, she secured a job as a cashier at Dillons Grocery in Wichita, Kansas. It was at Dillons that she met the love of her life, Arlo Loyal Sellers. They were united in marriage on November 30, 1952 in Argonia, Kansas during a once-every-50-year ice storm. The couple remained married for 66 years until Arlo’s death in 2019. The family originally made their home in Wichita and were blessed with three sons. In 1973 they built a home in Augusta, Kansas. In Augusta, Gloria worked several different jobs at the Augusta Dillons Grocery while Arlo was the store manager. Upon Arlo’s retirement, the couple moved to the North Shore of Hawaii, where they lived in Haleiwa, Hawaii in 1986 and 1987. After a couple of years in Tucson, Arizona, they moved to Broken Arrow, Oklahoma in 1989 where they lived until 2014 when they moved to Kentucky to live with their middle son. In 2020, Gloria moved back to Broken Arrow to be close to her oldest and youngest sons. Throughout her career, Gloria was a homemaker, a floral designer at Dillons, a secretary and office manager at Tulsa Tech. While she was the office manager at Tulsa Tech, she wrote a check to purchase a 727 airplane! Gloria was very family-oriented and loved cooking for her family. Gloria’s chocolate pies were known far and wide and her “earthquake” birthday cakes were famous as well. Gloria also enjoyed the outdoors and adventures with her husband and family. After becoming a Christian in 1965, Gloria was very actively involved in the Church throughout the rest of her life. She is survived by her three sons, Greg Sellers and wife Christi of Broken Arrow, Oklahoma, Jeff Sellers and wife Laura of Harrodsburg, Kentucky, and Theo Sellers and wife Patty of Tulsa, Oklahoma; six grandchildren, Joshua Sellers of Broken Arrow, Oklahoma, Grant Sellers of Lexington, Kentucky, Lynette Sellers of Harrodsburg, Kentucky, Joel Sellers of Harrodsburg, Kentucky, Zachary Sellers and wife Sara of Broken Arrow, Oklahoma, and Kayla Urizar and husband Ivan of Tulsa, Oklahoma; four great-grandchildren, Braden, Isabelle and Abigail Sellers of Broken Arrow, Oklahoma and Leila Urizar of Tulsa, Oklahoma; and one half-sister, Beverly Kelly of Albuquerque, New Mexico. She was preceded in death by her husband, Arlo Sellers; father, Charles Davy; mother, Patsy Emberty; sister, Fern Peterson; half-sister, Louise Navarro; half-brother, Paul Emberty and great-grandson, Kaysen Sellers. Gloria will be missed by a host of family and Christian friends.

Gloria Loretta (Davy) Sellers was called home by her Lord and Savior on Sunday, May 3, 2020 at the age of 86 years. She was born February 16, 1934 on the Indian Reservation in Anadarko, Caddo County, Oklahoma to Charles Frank and Patsy Nellie... View Obituary & Service Information

The family of Gloria L Sellers created this Life Tributes page to make it easy to share your memories.

Gloria Loretta (Davy) Sellers was called home by her Lord and...

Send flowers to the Sellers family.