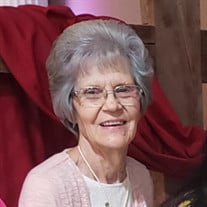 Goldie Marie (Higgins) Alley, of Broken Arrow, passed away November 9, 2021, in Tulsa at the age of 87. She was born May 10, 1934, in Milfay, Oklahoma to Herman and Leola (Lee) Higgins. On June, 28, 1952, Goldie married Max Alley in Bristow, and together they created a beautiful family having 3 children Sherry Russell (Alley) Gay Jacobs (Alley) and Bucky Alley. Goldie cherished her family in many ways. She enjoyed cooking meals to gather her family at the table, and wonderful baked goods were appreciated by all. Her hobbies included tending to her flowers, reading her Bible and attending her grandchildrens events and activities. As a woman of God, she was called to be an evangelist alongside her husband, Max and son, Bucky Alley. They traveled together, in a bus, for over 30 years preaching and singing the gospel. Her and her husband were survivors of the I-40 Webbers Falls bridge collapse. Goldie was preceded in death by her parents, Herman and Leola Higgins; Husband Max Alley, son, Terry Max (Bucky) Alley; and great-grandson Jack Vanarsdel. Goldie is survived by her children, Sherry Russell, Gay Jacobs, both of Broken Arrow, Daughter in law, Teresa Alley, of Owasso; Sister Carolyn Terry, of Oklahoma City; 9 grandchildren; 20 great grandchildren.

The family of Goldie Marie Alley created this Life Tributes page to make it easy to share your memories.

Send flowers to the Alley family.