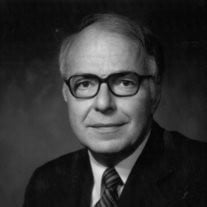 H. Arthur Nedom, passed away on March 11, 2013. Mr. Nedom was retired and living in Tulsa, OK where he grew up. He was born on August 19, 1925. After graduating from Central High School in 1942, he served in the U.S. Army Infantry in Belgium and Germany during World War II, where he was awarded the Bronze Star for heroic conduct in battle. He is a Distinguished Alumnus of The University of Tulsa where he received his BS and MS degrees in Petroleum Engineering. Following graduation, he was employed by the Amerada Petroleum Corporation for 20 years, becoming Chief Engineer and Vice President. In the following years he was President of the Indonesian American Petroleum Company (IIAPCO) and later the Managing Director of Weeks Petroleum Limited, both exploration and production companies. Before retirement, he served as Chairman of the Board of Arbitration for the Prudhoe Bay Unit in Alaska.Mr. Nedom remained active in engineering affairs. He was the Chairman of the Offshore Technology Conference and was President of the Society of Petroleum Engineers (SPE). He received the DeGolyer Distinguished Service Medal, the Distinguished Service Award, Honorary Membership, and was twice named a Distinguished Lecturer for SPE. He was later elected President of the American Institute of Mining, Metallurgical and Petroleum Engineers (AIME) and received Honorary Membership, AIME and SPEâ??s highest honor. Mr. Nedom also served as Chairman and was a co-founder of the American Association of Engineering Societies, which encompasses all engineering disciplines.Prior to returning to Tulsa in 2006, Mr. Nedom and his family lived in Westport, CT for 30 years. He enjoyed playing bridge, music, traveling, and remained active in his church and community. He was admired for his ability to embrace modern technology and for his clever sense of humor. He is survived by Patricia (Rankin) Nedom, his wife of 40 years and their daughter Nicole Nedom. He is also survived by his two sons, Richard A. Nedom (Phyllis) of Tulsa and Robert L. Nedom (Judy) of Ulysses, KS.

H. Arthur Nedom, passed away on March 11, 2013. Mr. Nedom was retired and living in Tulsa, OK where he grew up. He was born on August 19, 1925. After graduating from Central High School in 1942, he served in the U.S. Army Infantry in Belgium... View Obituary & Service Information

The family of H. Arthur Nedom created this Life Tributes page to make it easy to share your memories.